At Mercedes today it’s all about the digital unveiling of the brand new GLA. But during the 15-minute presentation, Ola Kallenius, the CEO of Mercedes, has officially confirmed for 2020 the new entry-level Mercedes EQA 100% electric SUV. And the similarities seem amazing.

On the occasion of the presentation of the new Mercedes GLA (2020), Kallenius confirmed the arrival next year of the EQA. As you can see on the sketch in the background, the official said that the lines will be very close to those of the new and second generation GLA.

Earlier spyshots caused some rumors, but the first official sign of life confirms these suspicions. The side view of the EQA is shown on a large screen behind a gleaming GLA. Although the car is packed from head to toe with special foil, it can be seen at a glance that the electric car looks like the new GLA.

Recall that the latter saw its height increase by more than 10 cm compared to the first GLA. The zero-emission SUV will also benefit from a high roofline to maintain a good habitability on board, despite the addition of batteries under the seats. In any case, we are moving away from the Concept EQA hatchback lines, presented at the 2017 Frankfurt Motor Show.

Mercedes EQA “made in France”
The new Mercedes EQA will be assembled in France, in the Hambach factory. It will compete with the BMW i3 and have a range of 400 kilometers. Technically, all new Mercedes electric models will use the modular EVA platform (Electric Vehicle Architecture), capable of accommodating one or two engines and a transmission to the front wheels, rear wheels or all four wheels.

As with the EQC, a distinctive black panel will be used at the front to allow the EQA to stand out from the rest of the thermal range. The EQA is also expected to feature electric Mercedes styling characteristics. Take the wheels that get denser rims and the grille which will have to do without air intakes. Blue details will find their way to the car here and there. Källenius did not reveal anything about the technology or other specifications. The spotlight will be on the EQA in 2020. 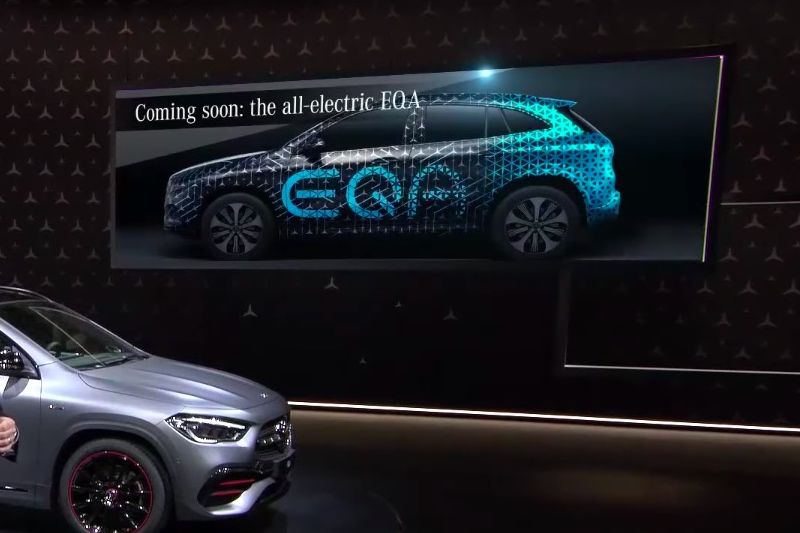