Mercedes EQ Concept First Drive: This is how the electric future goes

Mercedes EQ Concept First Drive: Under the all-new sub-brand “EQ”, Mercedes will bring an entire family of electric cars to the market from 2018 onwards. First model is a compact SUV called EQC. Auto motor und sport has experienced the electrical future of Mercedes.

The term “EQ” is actually known from the hifi world, in which the “equalizer” is responsible for the control of highs and lows. So, let’s apply this principle to Mercedes’ Concept EQ and take a look at the ups and downs in the compact SUV. After the electrified study was presented at the Paris motor show last Autumn, our German colleagues were now able to test the Stuttgart E-Vision from the passenger seat, in Berlin.

“It is our aim to show our Concept EQ in real daylight and surrounded by other cars in motion. Just to see how it fits into the real world, “explains EQ designer Thomas Sälzle. And he does well. Despite the futuristic overall impression, it does not feel strange to sit in the concept car. No spaceship feeling, but a future-oriented idea. With admittedly quite gruesome driving dynamics characteristics. 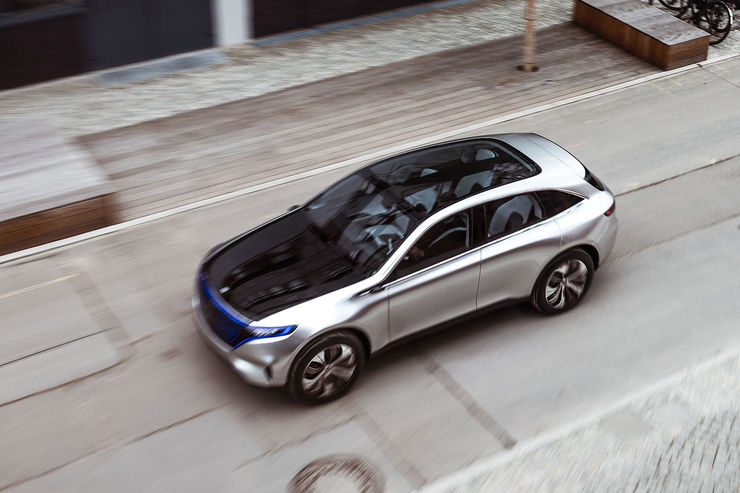 The shock of experiencing a concept car in the wild is extremely mild. The electric car owes this to the approach of the designers. Formally, Mercedes EQ Concept holds oneself to known SUV proportions. A similarity to the GLC is hardly hidden, a detail also betrayed by the identical length of 4.73 meters. High-tech details accentuate the exterior; Most noticeable is the black panel mounted up front. At its center the obligatory star is lit, framed in a digital blue radiator grille. Sälzle did not want to dilute Mercedes DNA, but merely put it in a modern context. Wide shoulders and a sporty greenhouse – the bully Concept EQ does not use beads and edges. “Seamless” is the main theme. Round front, fully clad underfloor, even the door handles are dispensed with. The opening works via touch sensors. However, as always, the question arises: What parts will make it to the series version? “We have been able to save a lot of the concept for the series variant,” Sälzle says. Much bolder than usual at Mercedes, but details remain secret for the time being.

Concrete view of the production car
We already know some values ​​that are purely hypothetical. For example, the range of 500 kilometers, the output of up to 300 kW coming from two electric engines, which sit on the front and rear axle and thus offer fully-variable torque distribution. “Engineer Jörg Weinhold confirms,” ​​This is a very, very concrete outlook on the real model. “As far as the assistance systems and the ability to drive autonomously are concerned, the first EQ model is already ahead of the new S-Class facelift. An important factor for this is the high-resolution map material stored in the memory of the navigation system. The batteries, which are spread over the entire floor, are being built by Mercedes from this year, in Saxony, which makes it clear that the company is serious about electromobility. 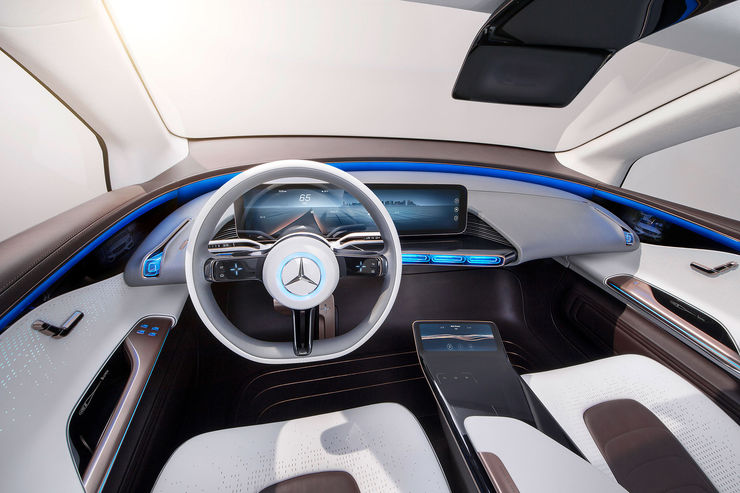 Truly spectacular is the interior with a round-framed light strip running the entire width of the dashboard and the car itself. This complements the really large central display (replacing the two-screen format familiar from E- and S-Class) up front and the functional LEDs pulsating through the perforated leather of the door panels. UX designer Vera Schmidt describes the idea as follows: “The light is not only illustration, but we represent information in space, rather than just on the display. The highlights in the side walls also synchronize with the music. The appearance of the ads can be freely configured. From a completely reduced representation of the most necessary information to a complex layout with a variety of vehicle data everything is possible.”

Boost mode provides white light
If you activate the full power of the engines by the so-called boost mode, the cockpit dives into white light. Thus the driving modes are optically underlined. Screens mounted in the doors and the center above the windshield replace conventional mirrors, although they are not particularly high-contrast. But it’s all about principle. Mercedes does not design the ventilation nozzles in a jet design, but flat and, of course, also illuminated. With warm air red light is shinning through, in cool air blue. Red also illuminates the rear window, at least during braking, thanks to the LEDs in the spoiler. On the steering wheel there are touch-sensitive keys which, unlike in the current E or S-Class, are coupled with OLEDs and can thus represent different layouts. 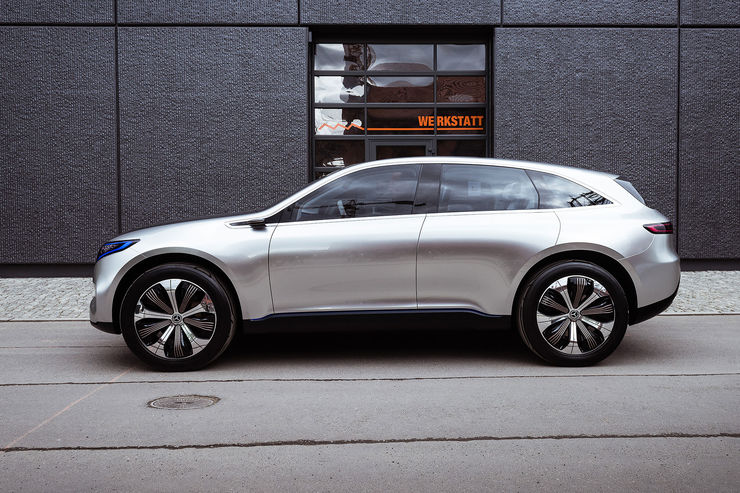 A market launch for the production model is planned for late 2018. The compact SUV, which will be called EQC, will be followed by sedans and compact models with electric drive, taking the Mercedes EQ range to no less than ten different models by 2025.

Conclusion
One could say Mercedes has digitized the possibilities for vehicle customization with the EQC. Since the shift lever is already familiar from other models, lurking behind the steering wheel, the general driving experience is very similar to current Mercedes standards. We look forward to how brave the series model is. The approach to combine common language with high-tech features has certainly succeeded. Futuristic? Absolutely. Strange? Not at all. 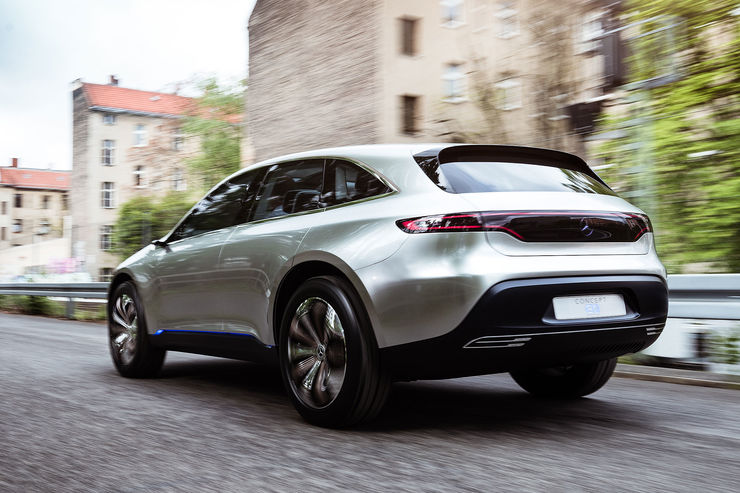