Mercedes E-Class prices the new T-Modell from €48,665 in Europe

Mercedes E-Class prices the new T-Modell from €48,665 in Germany. Order books are now officialy open for European customers with the first deliveries set for October.

The newcomer costs on average 1.1 percent more than its predecessor when equipped to the same specification. Despite a significant increase in efficiency and output (143 kW/195 hp compared with 125 kW/170 hp) and far lower fuel consumption (4.2 litres compared with 4.8 litres per 100 kilometres), the basic price of the E 220 d with automatic transmission, for example, is comparable with that of the previous E 220 BlueTEC (€50,485.75 compared with €50,158.50).

The engine range of the Estate, of course, corresponds to that of the sedan with the all-new 2-liter diesel engine, codenamed OM654, sitting at its core. Initially, the diesel range will be very clear as it consists of only the E 220 d version with 194 hp. Mercedes did takes the opportunity to add another gasoline version, though, the E 250 with 211 HP above its de-tuned but virtually identical 2-liter four-cylinder turbo E200 with 184 HP. The 9G-Tronic automatic transmission is standard in all cases. 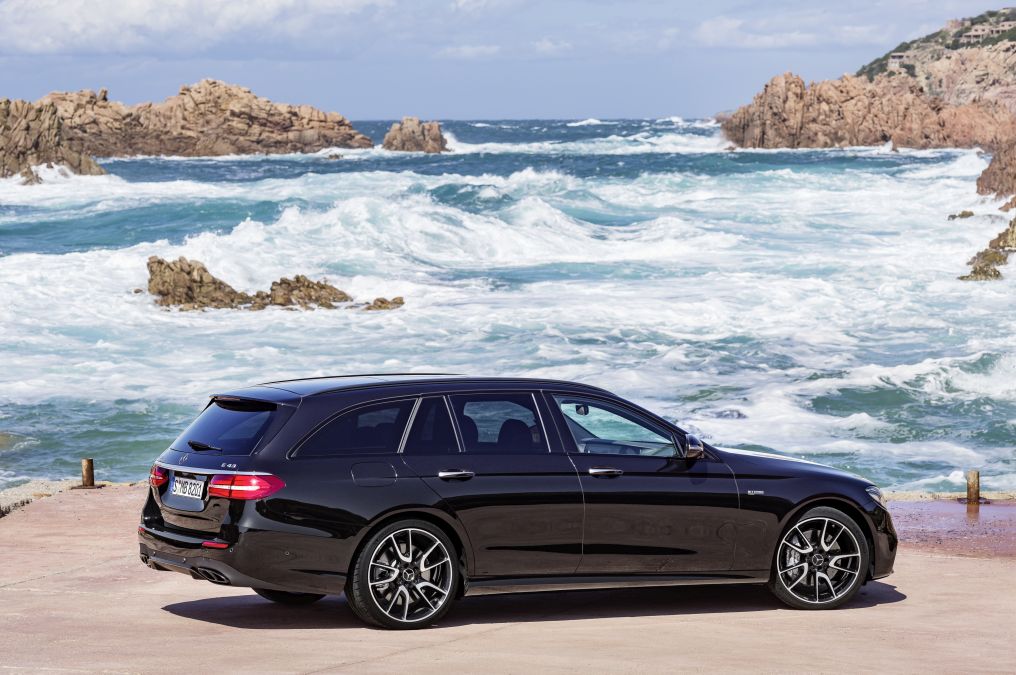 Mercedes is also launching the first performance variant of the all-new E-Class T-Modell, the Mercedes-AMG E 43 4MATIC, priced from €75,089. With two new turbochargers and corresponding software applications, the supercharged six-cylinder engine delivers an output of 295 kW (401 hp). As ever, the standard-specification AMG Performance 4MATIC four-wheel drive combines optimum traction with high agility on the E 43, thanks to rear-biased torque distribution with a front-to-rear ratio of 31:69 percent. The 9G-TRONIC automatic transmission with shorter shift times, the retuned sports suspension based on the AIR BODY CONTROL air suspension and the more direct steering ratio also provide for signature AMG Driving Performance. A wide list of customisation options includes the AMG carbon-fibre centre console (€1130.50), the AMG carbon-fibre trim (€3510.50) and nappa leather upholstery (€2618) or the AMG performance steering wheel in black nappa leather/DINAMICA microfibre (€654.50).

Following current design trends, the roofline of the new Estate is slightly lower, more angled than that of the previous model. That leads to a slightly smaller cargo area with a maximum loading capacity of 1,820 liters when the bench is folded. The previous generation offered 1,950 liters. With the rear seats in place the luggage volume is now 640 liters (previous model 695 liters). Despite the reduction, the E-Class is still the most practical car in its segment, more so than both its main competitors, the Audi A6 and the BMW 5 Series. The EASY-PACK load-securing kit (€351.05) allows the load compartment to be used in a versatile and safe manner. This solution for managing the load space includes rails in the vehicle floor, fasteners, a telescopic rod and luggage holders. 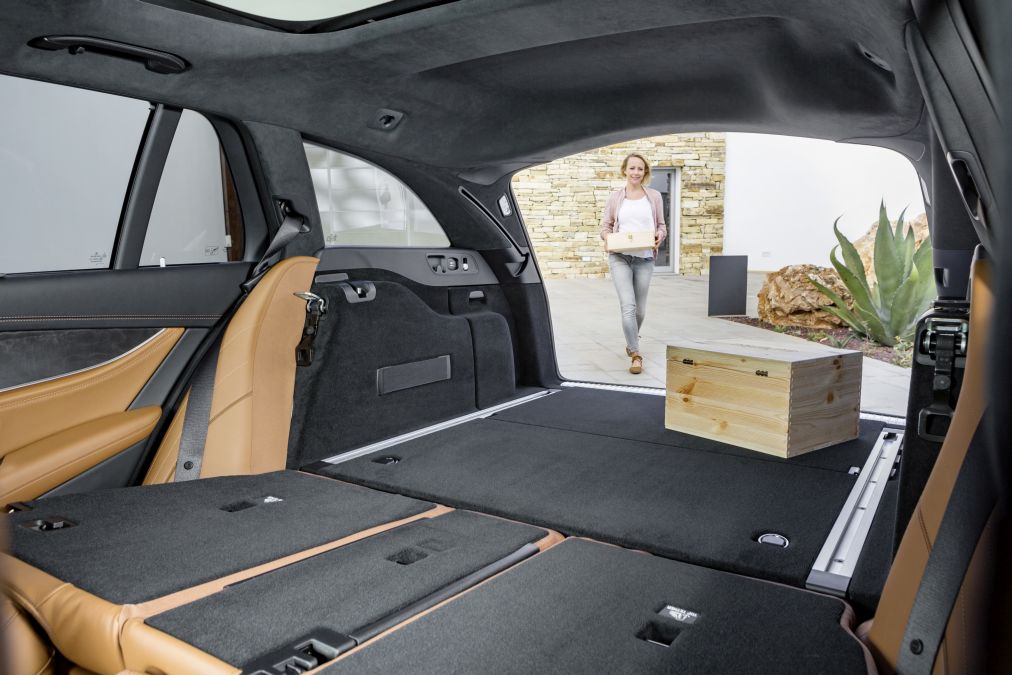 For the first time, the rear seat backrest is now adjustable, so you can choose to sit less or more upright when the backrest is ten degrees steeper inclined in the so-called cargo position, thereby increasing the default loading volume with 30 liters to 670 liters. Also very practical: The rear seat backrest is now divided as standard in the ratio 40:20:40 and can be folded by pulling a single grip, while the headrests also fold automatically when you lay the seat down. The electrically operated tailgate can also be opened with a a kicking motion with a foot underneath the rear bumper in conjunction with the KEYLESS-GO package (€952) with HANDS-FREE ACCESS. The now fully electrically retractable and extendible trailer coupling with ESP trailer stabilisation and Crosswind Assist can be ordered for €1082.90.

Safety highlights include the Driving Assistance package with Drive Pilot (€2261): this system represents Mercedes-Benz’s next step along the road to autonomous driving. As Distance Pilot DISTRONIC, it is not only able to automatically keep the car the correct distance behind vehicles in front on all types of road, it can also follow them at a speed of up to 210 km/h for the first time. The Driving Assistance package Plus (€2856) furthermore includes the PRE-SAFE® Impulse Side function. Active Brake Assist is fitted as standard. It is able to warn the driver of impending collisions, provide optimum support with emergency braking and also apply the brakes autonomously in an emergency. In addition to slower-moving, stopping or stationary vehicles, it can also detect pedestrians crossing the danger zone ahead of the vehicle. 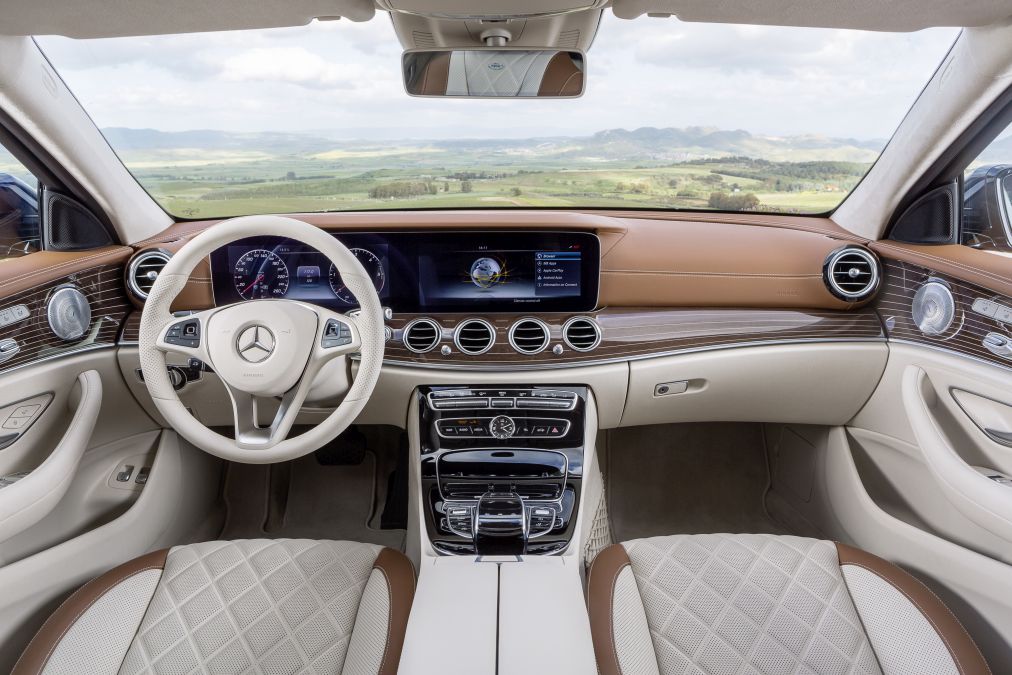 Technically, the new T-Modell will be largely identical to the sedan from a technical/technological stand point whith it shares not only the MRA platform and engines but also the digital cockpit with two large 12,3-inch screens (€1011.50). The standard E-Class versions will get traditional analogue dials and an 8.4 inch central infotainment screen. The Touch Controls on the multifunction steering wheel (standard) allow the instrument cluster and multimedia system to be controlled by making swiping movements with the fingers. The COMAND Online professional multimedia and navigation system with on-board HDD costs €3272.50.

A self-levelling rear air suspension continues to be part of the vehicle concept as standard. All-round air suspension is available as an option in the form of AIR BODY CONTROL (€1785).