Lewis Hamilton is the new Formula 1 World Champion. The Briton won the World Championship title for the 5th time and crowned himself king of the competition two races before the end of the season.

It was race number 226 in Formula 1 for Lewis Hamilton, who joins the competition’s elite of three drivers that won the world time five times, together with Juan Manuel Fangio and Michael Schumacher. 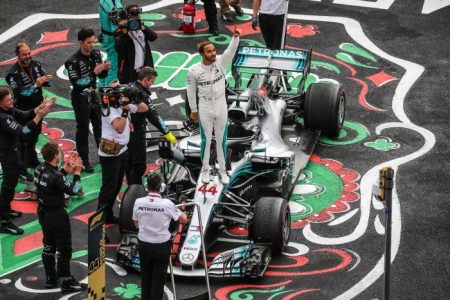 Hamilton was only fourth at the Mexican Grand Prix, where Dutch driver Max Verstappen from Red Bull Racing won. The two drivers from Ferrari, Sebastian Vettel and Kimi Raikkonen. His teammate, Valtteri Bottas, had to be satisfied with the 5th spot.

The fourth place in Mexco was enough for Lewis to cancel any chance to the championship title for his rival, Sebastian Vettel, from who he is 64 points ahead, a gap impossible to recover in the last two races of the season, in Brasil and in the United Arab Emirates.