Less active on the super popular social network like Facebook, Twitter and Instagram, Daimler’s CEO seems to favor LinkedIn. He recently admitted to getting a strange job suggestion from the career networking webpage: one at the rival BMW!

Dieter Zetsche has no less than 38,000 followers and the number is growing, on the career platform LinkedIn. But he can’t help being surprised at some options the webpage provides him with. Well, he’s hopefully got a CV in hand, just in case he wants to jump ship. 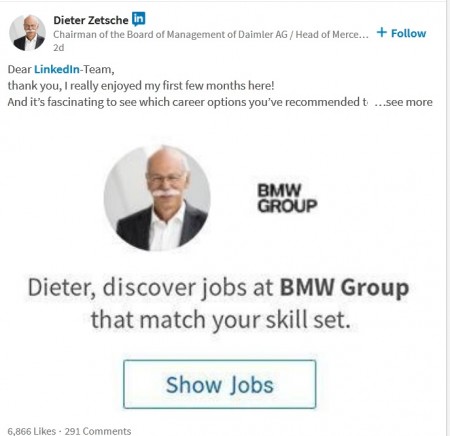 “It’s fascinating to see which career options you’ve recommended to me… :),” he said, displaying a print screen of the suggestion that read, “Dieter, discover jobs at BMW Group that match your skill set.”

That was the post that got almost 7,000 likes and amused his followers. AutoNews reports that Zetsche last month briefly commented on his LinkedIn job matches at a conference near Stuttgart, revealing one of the recommended openings was for a position as a BMW motorcycle salesperson in Kassel, a midsize German town near Hanover. He took it as a joke, but… Never say never!