The Mercedes CLK DTM AMG is one of the greatest cars ever made by AMG. Built to celebrate the CLK DTM’s championship win in 2003 with Bernd Schneider, AMG produced 100 examples of the coupe version and later on, in 2007, 80 units of the cabrio version. A coupe version is for sale at a luxury british dealer for 275,000 pounds (aprox. 315,000 euro).

The street version of the Mercedes CLK DTM AMG features a de-tuned version of the SLS AMG’s 5.4-litre engine, racing-inspired suspension and a luxurious interior. The famous AMG 5.4 litre V8 was adapted for the street and it has  new pistons, valve gear, crankcase, cooling system, exhaust, supercharger, while the huge power of 582 HP is delivered to the rear wheels through a  five speed automatic gearbox 5G-Tronic Speedshift. The car reaches 100 km/h in just 3.9 seconds and has a top speed of 320 km/h.

Step inside and you are greeted with stunning one piece carbon fibre bucket seats, oval section carbon fibre rod that runs across the cabin to provide mountings for the race harness, carbon fibre door panels, leather and alcantara trim, fully carpeted footwells and drilled alloy pedals. On the horizontal section of the centre console, between the seats is an aluminium plinth carrying a badge reading CLK DTM One out of 100. The centre console also features a small T piece gear lever with its simple Park, Reverse, Neutral and Drive layout.

The Mercedes CLK DTM AMG’s aggressive exterior styling showcases the car’s racing heritage. Those incredible bodywork extensions to accommodate the wider tracks are formed from carbon fibre. The car has a deeper front apron, larger intake ducts, flared wheel arches and a boot mounted carbon fibre rear wing, all developed from DTM. The brakes were upgraded and the rear seats removed too.

The car is ready for the race track but the most interesting thing is that this car, which I drove at the end of 2003, is perfect for the day by day use with an unbelievable driveability.

Because of the very limited serie of only 100 units for the coupe, the list price was around 235,000 euros and only a few could afford it. The car was very popular for racing drivers as well, like Juan Pablo Montoya, Mika Hakkinen, Kimi Raikkonen and Jenson Button who owned one. 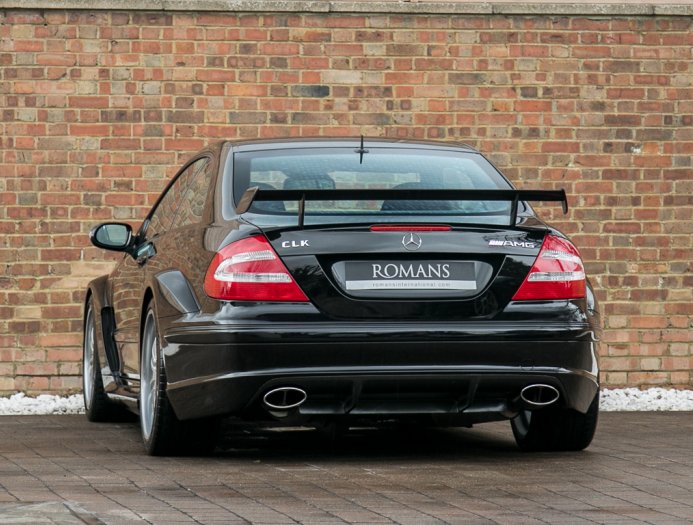 One of the 100 coupe versions are for sale at a british luxury dealer Romans International 15 years after Bernd Schneider won the DTM championship in 2003.

Romans offers this ultra rare 2005/54 Mercedes CLK DTM AMG for sale presented in Obdisian Black with Black leather &Alcantara interior. Limited to just 100 cars worldwide and 40 right hand drive examples, this is an incredible opportunity to own one of the rarest and most collectible cars ever made. With only 7,233 miles, this car comes with a very comprehensive Mercedes-Benz Service History and must be one of the best examples on the market.

You can see the full announcement here.