The Mercedes-Benz X-Class was not quite a succes. It had no hey day, it had no years of glory. But if the Project Kahn goodies were the standard equipment, would things have been any different?

The Mercedes-Benz X-Class failed to impress. The world was already full of luxury trucks. It didn’t stand a chance in front of the pick-up models that people had already been familiar with. But, because there is always a “but”, the Mercedes-Benz X-Class Project Kahn that stands right in front of your eyes is a Black Edition. It eventually received a widebody kit that totally transformed it. The package includes several visual enhancements that make the premium pick-up truck look more aggressive. Can it now fight the American giants?

The model has got front and rear vented wide wheel arches and a front bumper vented spoiler. The front bumper with vertical slats is now similar to those that Mercedes-AMG uses for its high-performance models. 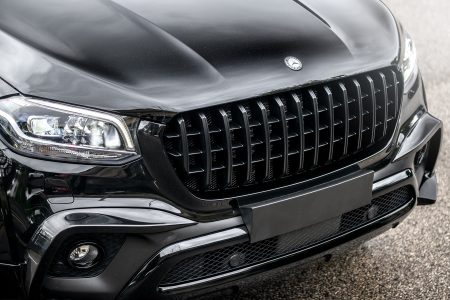 The X-Class now wears 22-inch black wheels and has been stripped off all of its chrome detailing. There is a front bumper crash bar that provides it with a more impressive stance.

The classy cabin of the Mercedes-Benz X-Class Project Kahn

The interior also underwent a major change in order to secure more comfort and a higher quality. The seats are now covered in quilted soft leather with contrasting red stitching. So are the door panels and the gear selector, the center armrest and the upper area of the dashboard. The transformation creates a sophisticated and origial atmosphere. 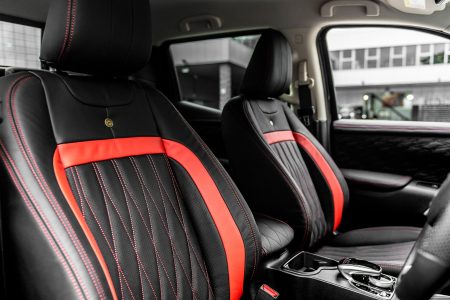 Kahn Automobiles also makes the list of the standard equipment of the premium pick-up. A satellite navigation, a Style Package, a Winter Package that includes heated seats and LED headlamps are included. An 8-speaker audio system is also onboard.

The X-Class in the photos features an all-wheel drive 4MATIC system and the engine transfers torque towards both axles via a 7-speed automatic transmission as well.