Daimler’s chief executive officer, Dieter Zetsche, said that Mercedes-Benz has no intention in fully taking over Aston Martin, so the two companies will remain only “technology partners”.

The technical partnership between Mercedes-Benz and Aston Martin had as a consequence the stake increase from four to five per cent from Mercedes-Benz at the end of July 2014. But Mercedes-Benz won’t take over Aston Martin. Speaking at Paris Motor Show 2014, Mercedes-Benz chief Dieter Zetsche said that “it would not be in Aston’s interests to be incorporated in a big corporate organization, as it would include certain risks.

Therefore, the current five per cent shareholding are more than enough, so Aston Martin can remain independent while benefiting from Mercedes-Benz technology. Aston Martin is only 4,000 units a year so there is also a danger we would be distracted from our core business. There are no plans to increase our stake or take over.” 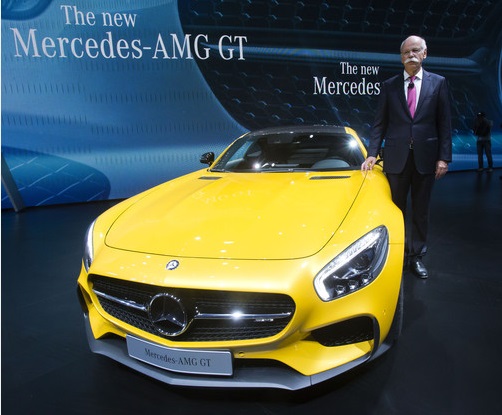 Furthermore, during his speech, Dieter Zetsche welcomed Andy Palmer from Nissan to Aston Martin and he also revealed the return of the Maybach name in the sense that we will see the badge used in a similar way to Mercedes-AMG. This means that super luxury models of the S-Class could be sold under the name Mercedes-Maybach.

Mercedes-Benz will supply the next line-up generation of Aston Martin with AMG powerplants V8 and possibly V12. In adition to the AMG engines, Daimler will also provide electrical architectures to Aston Martin.
The cooperation between Aston Martin and Daimler could be enlarged with other two projects. Aston-Martin confirmed the revival of Lagonda brand with a luxury sports saloon. Moreover, a luxury SUV is also in discussion and the base for this SUV could be the Mercedes-Benz GL platform.

Regarding the Smart brand, Daimler president excluded any expansion in the form of Mini or Fiat 500 range, because the development of the smart is most likely to come from getting involved in more urban mobility and car sharing schemes.