The Mercedes-Benz W 111 “Fintail” came in 1959 as a convincing statement about the premium-oriented visions of Daimler-Benz. The closely related W 110 and W 112 widened the range soon. At a closer look, the concept of these cars appears to be an amazing blend of contrasts.

During the early 50s, there wasn’t any dedicated styling department at Mercedes-Benz, but Karl Wilfert (manager of the passenger cars development) and Friedrich Geiger (designer at Daimler-Benz since 1933) and some of their collegues were trying hard to make new good looking automobiles. 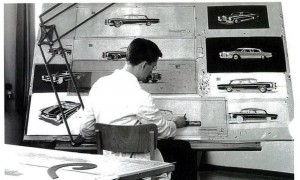 Then, in 1957, the french designer Paul Bracq came in. This being said, it is easier to understand the gap between the rather dry design of the “Ponton” series and what happened with the Mercedes-Benz W 111 “Fintail”: a mix of conservative details, actual trends (mainly, the fintails, of course) and curvy elongated contours, all together coming to define an original personality.

If only the wheelbase would have been taken into consideration, the Mercedes W 111 “Fintail” (2700 mm) was not a lot bigger than the W 120 “Ponton” (2649 mm). Yet, visually, there was a significant difference between these automobiles. 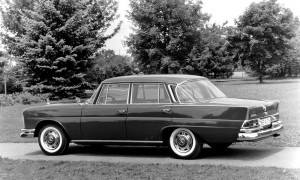 Brief conclusion: although things chaged a lot regarding the design apporoach with Mercedes-Benz W 111 “Fintail”, the phase of a deeply personal style, above the “zeitgeist” (“tune of the times” or “l’air du temps”, if you prefer) was yet to come for Mercedes-Benz.

Another leap associated with the concept of the Mercedes-Benz W 111 “Fintail” concerned the passive safety. The famous engineer Bela Barenyi designed frontal and rear crumple zones for the self-supporting body of the Mercedes “Fintail”, while the cabin was made to be non-deformable. Various crash-tests were performed and extensively studied during the development of these cars and later. 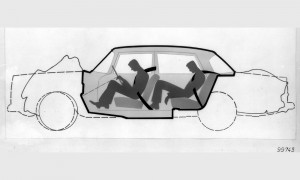 As in the case of the “Pontons”, the range was enlerged soon after the debut of the Mercedes W 111 “Fintail” and, finally, got a three layers structure. Underneath the six-cylinder engined cars of the W 111 series (Great Fin), in 1961 were introduced the four-cylinder engined versions of the W 110 series (Little Fin, clearly identified by the round headlamps), while the place from above was taken, in 1962, by the W 112 series. Although the sales of the W 112 (in fact we are talking here about just one version – the Mercedes 300 SE), never reached really impressive figures, the car itself is an example of refinement. 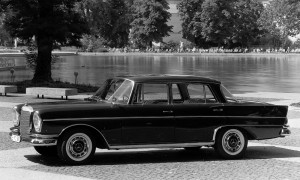 Among it’s attractive standard features should be mentioned the power steering, the automatic gearbox, the pneumatic suspension, the 14 inch rims and the revised interior finish. A longer wheelbase sedan was also offered – not to be mistaken with the Pulmann limousine, a bespoke item. The “straight-six” 3,0 litre (160/170 PS) engine mounted under the bonnet of the W 112s was closely related to the glorious unit (M 189) that pushed the W 194 and W 198 (300 SL Gullwing) coupes toward their numerous competitional victories. The arrival of the Mercedes 600 limousine in 1963 had a brake effect on the sales of the W 112 and W 112 long wheelbase models. Their production ended in 1967. The assmebly of the Mercedes-Benz W 111 “Fintail”  and of the W 110 continued until 1968.