The Mercedes-Benz Unimog has been voted best cross-country vehicle of the year in the “special-purpose vehicles” category by readers of specialist magazine “Off Road” for what is now the twelfth time in a row.

The “Cross-Country Vehicle of the Year” poll had a total of twelve categories. 85 080 votes were cast with 126 vehicles in the running. The Unimog took first place among special-purpose vehicles with a phenomenal 43.3 percent of the readers’ votes.

The genes for such extreme applications are in its blood. Thanks to the mid-engine layout of the extreme-terrain Unimog Euro VI, the frame offset is now further aft, and overall this means a lower vehicle centre of gravity with a simultaneously high ground clearance, which further optimises the handling in off-road operations. Axle articulations of up to 30 degrees are possible due to the torque tube technology in conjunction with coil springs. Portal axles and a climbing ability of 45 degrees are further features of the extreme-terrain Unimog that goes by the model designation U 4023/U 5023. In addition, there is the maximum fording depth of 1.20 m and a lateral inclination angle of up to 38 degrees. Driving in extreme situations with engaged all-wheel drive is assisted by the on-demand differential locks and the “Tirecontrol Plus” tyre pressure control system.This can simply be set with buttons on the steering wheel for the respective application via the modes “road”, “sand” and “rough road”. 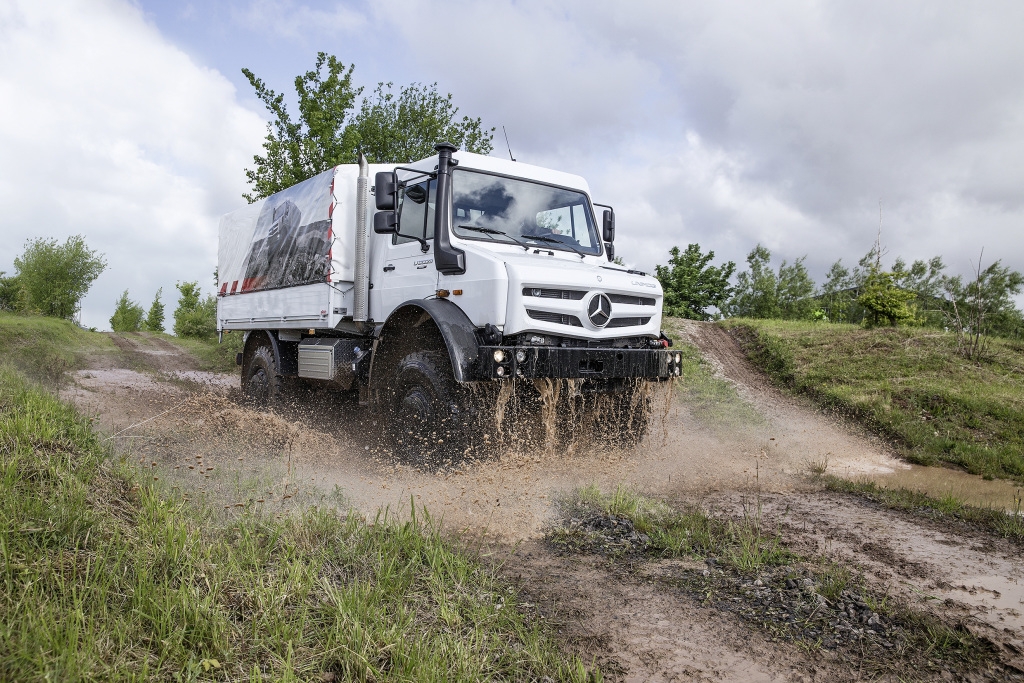 The power comes of the high-torque BlueTec 6 common-rail OM 934 LA engine, a four-cylinder unit with 5.1-l displacement, 170 kW (230 hp) and 900 Nm torque. Eight forward and six reverse gears are available, and optionally there is also an off-road gear group for off-road applications in the speed range between 2.5 and 35 km/h.

The magazine “Off Road” has conducted the readers’ poll for cross-country vehicle of the year since 1982.