The Mercedes-Benz tombstone – Till death do they part

If there is love, there is love forever, both in this world and the other. A tombstone in Linden Park Cemetry, New Jersey, stands to prove it. The Chinese family of the deceased has chosen a Mercedes-Benz replica as a gravestone for their son, tragically killed in a car accident. The MB gravestone has been included in the New Jersey travel guide.

The legend says that the Chinese boy, killed at the age of 16, had a Mercedes-Benz promised from his big brother when he would reach the age of 17. But the young man was the victim of a fatal accident right before getting his driver’s license, in the early ‘70s. There is a Chinese custom that says that, if you promise something to someone and the person dies, you have to fulfill the promise, even if after death.

A family friend who attended the funeral ceremony more than thirty years ago, Richard, told that the big brother, David, owned a few luxury cars himself and was planning on buying one for his little brother, Ray, who was still living in Hong Kong. Ray’s parents did not attend the funeral, but sent money for the other attendants. “I was given $30, which I threw in a drawer and never touched since”, Richard remembered. 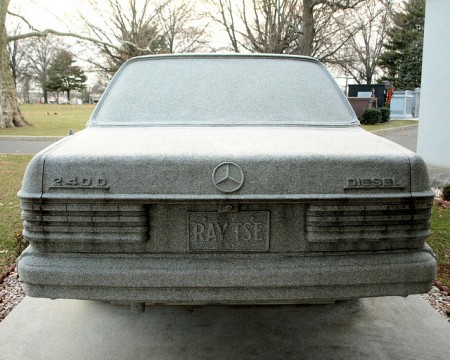 The Mercedes-Benz gravestone, shipped to the New Jersey cemetery all the way from Graniteville, Vermont, apparently cost half a million dollars back in the ‘70s and it is considered to be modern art craft. The car’s grill, the windshield wipers, the taillights and the exhaust pipes are sculptured in great detail. A master in sculptured tombstones, Anthony Sgobba, believes it must have taken more than a year to craft the granite.

The special mausoleum has been included in the “New Jersey Travel Guide – Local Legends and Best Kept Secrets” and it became a local sightseeing attraction.