They call themselves the SLR Club and the name says it all. Thre’re a bunch of Mercedes-Benz enthusiasts with a burning passion for the amazing SLR. And they love long road trips.

Apart from being a large group of Mercedes-Benz SLR lovers and most important, owners, the SLR Club know how road trips should work. When they are not taking part in regular Mercedes-Benz group drive events, car shows and all kind of high-class meetings, they organize the club’s biggest gathering: Tour du Soleil. 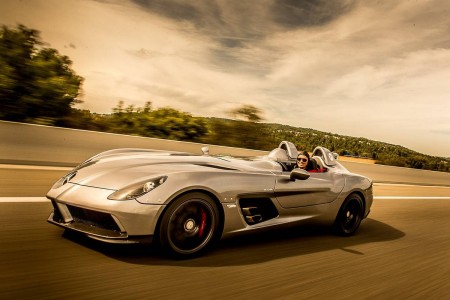 For the 2014 edition of this extravagance-filled roadtrip, the SLR Club managed to draw together a large number of participants who had to drove more than 1.000 km from the Provence region in France to Barcelona, Spain. The road trip was completed in five days and passed through some beautiful areas in the French and Spanish countrysides. Just check the media gallery if you need proof.

It goes without saying that all the guys know their cars and for them any Mercedes-Benz performance model is a superstar. This is why many different variations of the Mercedes SLR model could be seen during Tour du Soleil 2014, including one of the 75 SLR Stirling Moss editions as well as coupe and roadster variants of the 722 Edition.

The Mercedes SLR doesn’t need any introduction as although it was officially revealed during the 2003 Frankfurt Motor Show (yes, that is 11 years ago), its design and performances are still a benchmark in the present. But we’ll let the pictures do the talking.