Mercedes-Benz shows E-Class sketch and video at midnight. Happy New Year it is!

Mercedes-Benz has started the countdown for the revealing of the fifth generation E-Class together with the countdown for 2016. Shortly before midnight, the premium car brand released a sketch showing the design of the super limousine.

So this is what comes out after 48 months of research and development. “Emotional design and intelligent high-tech perfectly embody the Mercedes-Benz design philosophy of Sensual Purity”. This is how Mercedes-Benz is describing the company’s masterpiece of intelligent. The E-Class sketch shows elongated elegant lines, a sports grille, deep creases on the side and massive five-spoke wheels.

This comes right after Mercedes-Benz has revealed the interior of the limousine and also posted a video of the car being put through its paces, disclosing important figures of the development stage. 48 months of development time. 1,200 prototypes. 12,000,000 kilometers. 3,500 square meters of camouflaged film. All these played major parts in what you will all be seeing on the 11th of January at 2016’s first car show.

The head of the design division at Mercedes-Benz, Gordon Wagener, says the 2016 E-Class interior “moved forward two generations. Sitting in the current E-Class after taking a seat in the new one will be like going back to Stone Age.” 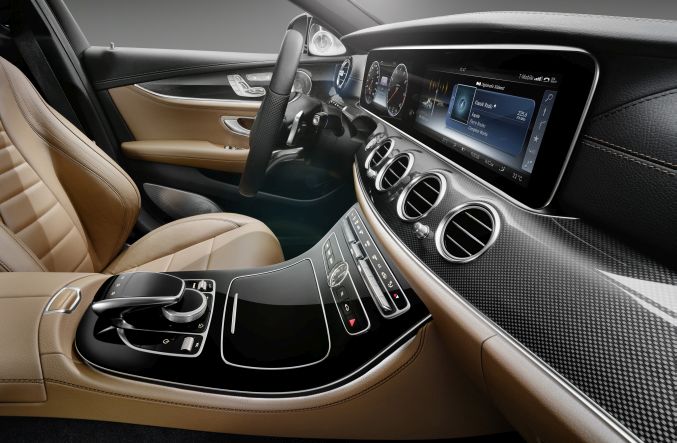 As for the exterior, he claims that it will be “much more beautiful and modern and much cleaner than even the C-Class and the S-Class”. The spy pictures  shown so far only back up his statement.

The car will be fully revealed in 10 days from now at the Detroit Motor Show and will go on sale in the spring of 2016, ready to fight the BMW 5 Series and the Audi A 6.

With the new E-Class the Swabians plan a full atack against the competitors from BMW and Audi, also preparing to replace their respective 5 Series and A6 limos. The sedan will not be alone for long, as the new E-Class family will reunite the Limousine (March 2016), Combi (mid-2016), Coupe (March 2017) and Convertible (september 2017). In addition, Mercedes is working on a fifth variant, the successor to the CLS (March 2018) and instead of the Shooting Brake the revolutionary AMG GT4 based on Mercedes junior supercar (september 2018). What is missing in the program? Perhaps an MPV in the vein of the R-Class, perhaps a pure electric vehicle in the E-class format.