As tradition dictates, Mercedes-Benz will shine again at this year’s Silvretta Classic 2015 (2-5 July) automotive summit with unique sports cars of the 1950s from the corporate collection on display.

More than 150 classic vehicles be part of the Montafon-Tyrol-Liechtenstein-Switzerland tour, among them the 300 SL racing sports car (W 194), 190 SL (W 121 II) in racing trim and an exclusive 300 Sc Roadster (W 188 II) will provide highlights at the 18th edition of the vintage car rally. 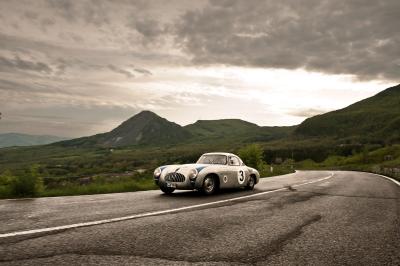 Of the three classic vehicles, the 300 SL racing sports car (W 194) from 1952 stands for the overwhelmingly successful return of Mercedes-Benz to motor racing after the Second World War, sporting an extremely light yet rigid space frame, enveloped by an elegantly arched, streamlined body made of aluminium-magnesium sheet metal. Because the space frame was built relatively high on the sides, the racing sports car was fitted with the characteristic gullwing doors, which were hinged at the roof. The car reached a top speed of 240 km/h thanks to its 129 kW (175 hp) M 194 inline inline-six-cylinder engine with a displacement of 2,996 cc. The Gullwing Coupé will participate in the Silvretta Classic Rally Montafon sporting the authentic colour scheme of the 3rd Carrera Panamericana Mexico race, which Mercedes-Benz finished in 1952 with a one-two victory. 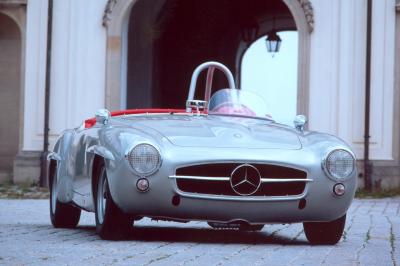 The 190 SL (W 121 II) production sports car from 1955 represents a rare racing version with windowless aluminium doors, smaller windscreen and other modifications. The bumpers and soft top on this variant could be removed for races. Even though the 190 SL, unlike the 300 SL (W 198), was not based on motor racing technology, it also made its mark in motor sport with major successes including the class victory achieved by Douglas Steane at the 1956 Macau Grand Prix. Even if its arsenal might sound puny by today’s standards (105 hp developed by a 1,897 cc inline-four engine) the SL became the dream car of the 1950s. The 190 SL will be driven at the Silvretta Classic by racing driver and Mercedes-Benz Brand Ambassador Ellen Lohr. 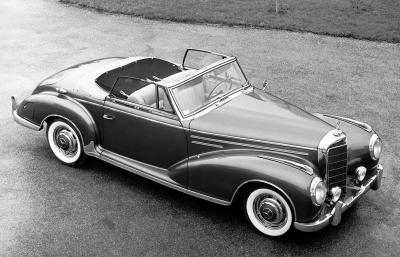 The Silvretta Classic Rally Montafon starts in Partenen at noon on 2 July 2015. The first stage is 116 kilometres long and takes the cars on the legendary Silvretta High Alpine Road to the Bielerhöhe Pass, and from there on to Wirl, Tschagguns and Bartholomaeberg to the finish of the stage in Schruns. The second stage, “Around the Piz Buin”, is 336 kilometres long and starts on 3 July beginning at 7.30 a.m. Among other places, it takes the participants to St. Anton in the Montafon, past Vaduz Castle in the Principality of Liechtenstein to Davos, the Flüela Pass, Scuol, Galtür and the Bielerhöhe Pass to Gaschurn. The final Vorarlberg stage on 4 July is 136 kilometres long and starts at 9.30 a.m. It takes the field over the Faschinajoch Pass and the Furkajoch Pass to Vandans, among other places.