Mercedes-Benz has just revealed its first-ever all-virtual show car at the 2022 League of Legends World Championship. The company promotes the futuristic-looking model as being right at the border between fantasy and reality in the digital space.

The 12th edition of the League of Legends World Championship starts today in North America and will be over on November 5. Mercedes has recently extended the partnership with game developer Riot Games all the way until 2025. This explains the arrival of the virtual show car in the third year of the partnership. It makes an appearance in the championship’s music video, starting September 23. The song is written and performed by American rapper Lil Nas X. The virtual car shows up briefly in the video, but it was enough to get the attention of the game’s enthusiasts. 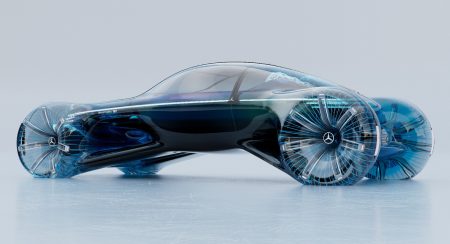 As anticipated by the teaser released two days before, the virtual car sports a glassy sleek silhouette and massive fenders that integrate wheels to match. A generous glasshouse and quite an impressive ground clearance for what seems to follow the lines of a coupe are also on the menu. Such a design simply defies the laws of physics, but anything is possible in the digital world.

“When designing an extraordinary and virtual show car, two worlds emerge – real automotive design and animated design. Because of the virtual space, there are no limits to what we can do. […] We can push the boundaries and give our creativity the space for the unexpected. The result is something unique: the first all-virtual show car from Mercedes-Benz,” explains Gorden Wagener, Chief Design Officer of Mercedes.

The new Mercedes EQS SUV will be part of the event, transporting participants to various locations across the United States. New York, Atlanta and San Francisco are part of the itinerary.