Mercedes-Benz is telling us loud and clear that 2014 is set to be a successful year for the brand as the German manufacturer increased its footprint in China even more after the assembly line in Beijing reached 500,000 passenger vehicles produced since it opened in 2006. The 500,000th vehicle produced “in China, for China” is an all-new long-wheelbase Mercedes-Benz C-Class.

According to Daimler, about half of these vehicles have been manufactured within the last two years, showing the rapid expansion that the production site has recently experienced.

“Continuous investment in localization is one of our key growth drivers for Mercedes-Benz’s future in China, and it is clear proof of our confidence in and dedication to this strategically important market,” said Hubertus Troska, Member of the Board of Management of Daimler AG responsible for Greater China. 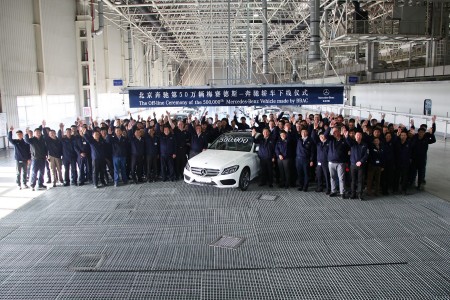 However, it looks like Daimler has big plans for its Chinese facility in the future:

“Going forward, we are determined to pick up the pace even more as we just signed a 1 billion Euro agreement with our partner for the localization of further compact car models. BBAC is undoubtedly on its path to become the largest Mercedes-Benz passenger car plant worldwide,” added Troska.

BBAC, a joint venture between Daimler and its Chinese partner BAIC Motor, has been producing Mercedes-Benz passenger vehicles since 2006 and engines since 2013. Last year, around 120,000 vehicles rolled off the Beijing-based production lines, accounting for approximately one-half of Mercedes-Benz’s total sales volume in China.

The facility produces 4- and 6-cylinder engines for locally produced passenger cars and vans built by Daimler’s local joint venture Fujian Benz Automotive Co., Ltd. The production line has been given an annual capacity of 250,000 units for the first phase, but according to Mercedes-Benz officials, higher numbers will be planned in line with the ongoing growth in unit sales.