Mercedes-Benz announces plans to invest almost $600 million (€ 500 million) in its France-based Hambach plant in France. It will be the production center where a new “compact electric car” will roll off the assembly line.

The plant has been working on the smart cars with an all-electric range. The investment planned by Daimler regards the EQ sub-brand. It is just the first step to electrification, as Mercedes-Benz plans to build electric versions of all the models in its portfolio by 2022.

The first of the EQ family will be the electric SUV designated EQC.  Daimler’s CEO, Dieter Zetsche, confirms that the investment will secure the production of the ‘compact EQ model’:

“20 years ago, we started an exemplary Franco-German project with the production of the smart in Hambach. Now we take the next step and for the first time in our more than 100-year old history we bring the production of Mercedes-Benz to France. With the compact EQ model from Hambach we continue our electric initiative.”

The EQA concept was revealed last year, as the preview prototype of the future compact. 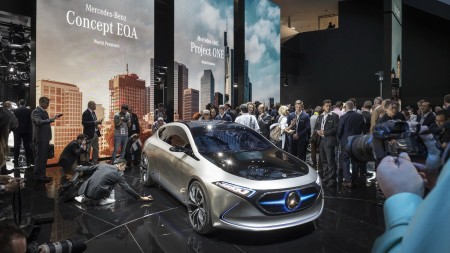 “The Hambach site in France features many years of experience in building fully electric cars. We want to take advantage of the enormous expertise and prepare the plant for the production of an electric Mercedes-Benz. We are investing a total of around 500 million euros in the Hambach plant and in the product”, says the Head of smart, Annette Winkler.

The manufacturing procedure will start off in the near future, but the exact moment the car will go into series production has not yet been revealed. The investment is directed towards the “construction of new facilities and also flow in the product itself: With state-of-the-art technology a new body shop and surface treatment will be built. The plant will also expand the assembly facilities and reshape the site’s infrastructure.”

Mercedes-Benz has already trademarked the EQA, EQB, EQC, EQE and EQS designations, so it won’t take long until we see the electric projects materialize.