A few others also signed on to tell the story of their Mercedes-Benz iconic automobiles and make a walkaround during the virtual car show.

Mercedes-Benz took the decision of setting up a virtual car show after the organizers of the famous Concours d’Elegance announced the cancellation of the show on the 22nd of April.

A list of the cars that were virtually displayed had already been made public by Mercedes-Benz a couple of hours before the event, but the list offered no indication of who owned what car. A 1908 Mercedes with a Benz Aero engine, a 1956 Mercedes-Benz 300 SL Gullwing, a 560 SL from 1988 and a G 300 D off-roader from 1991 took part in the show. It was though easy to guess who the gullwing belonged to. Jay Leno never made a secret of its one-of-a-kind collection automobiles. 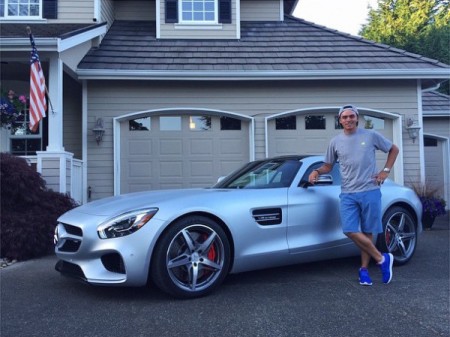 Rickie Fowler and his then new Mercedes-AMG GT S

It is a charitable event

All money gained from the virtual car show will be donated to the American Red Cross. The humanitarian organization is currently making huge efforts to fight the coronavirus pandemic in a country that has been severely hit by the massive spread of the virus.