Since the BMW X5 is now the oldest of the three premium German large SUVs, the best match for the newly facelifted GLE is the recently launched Audi Q7, a complete makeover for the big Ingolstadt offroader.

Like it or not, SUVs are here to stay and, apparently, to keep on expanding until every other car on the road is either an SUV or a crossover. Recently, there’s been heavy activity among two of the three German premium brands with both Mercedes-Benz and Audi launching new or restyled models. This couldn’t have gone unnoticed with the major German publications, so Auto Motor und Sport lost no time in coming up with a straight to the point comparison test.

It has to be said the table is a bit tilted, since the Q7 is a completely new model Audi has been developing for quite a few years, while the Mercedes-Benz GLE is just a facelift – although a pretty important one. Besides the name change, it’s got a new radiator grille, revamped headlights with LEDs, modified aprons and, most importantly, new features on the interior. The bulk of the body, though, remains the same as do the general dimensions. 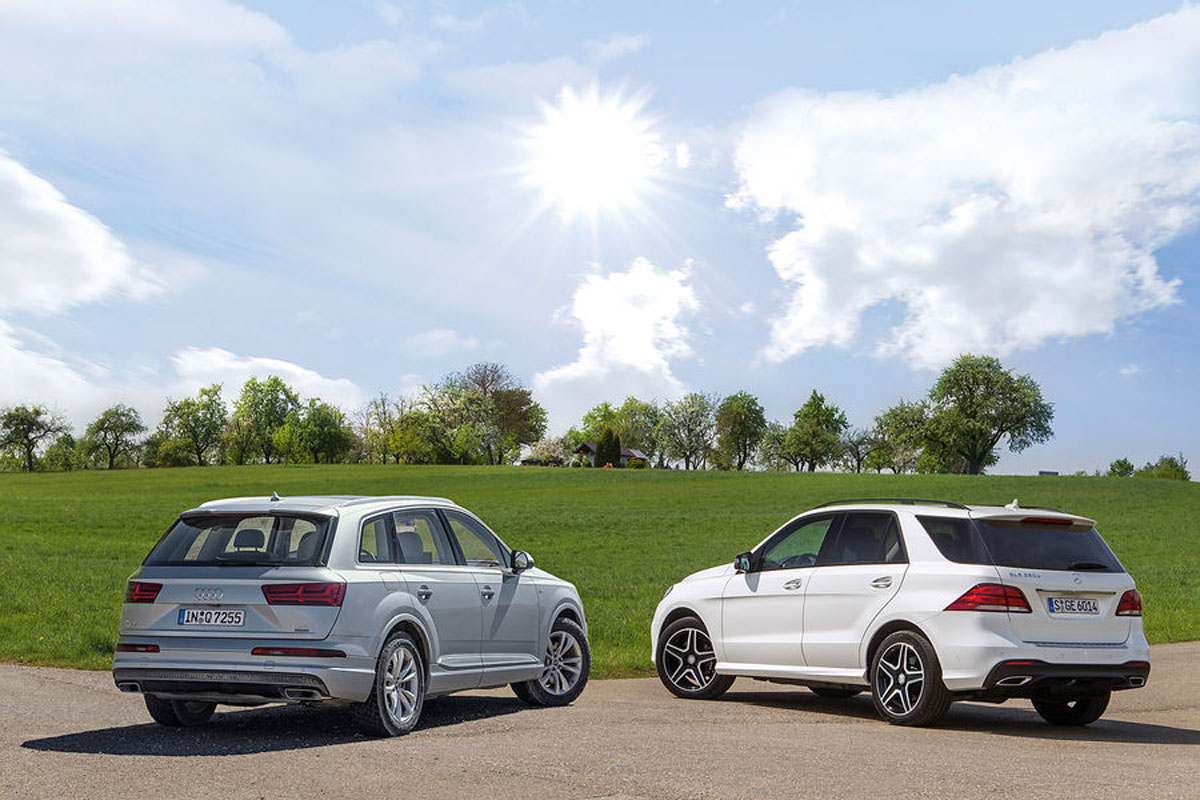 Speaking of dimensions, the Q7 is significantly larger with no less than 25 centimeters extra in length, or “half a class” as the German journalists put it. This difference is felt on the inside, where the Q7 offers more space especially in the boot (200 liters over the GLE), and for 1,390 euros (German prices) it even comes with two extra foldable seats.

And since we’re on the subject of the interior, let’s talk amenities: the Mercedes-Benz GLE goes the conservative path sticking to the tried and tested COMAND system which is starting to feel a bit dated compared to newer infotainment devices. The Audi Q7, on the other hand, with its all digital instruments cluster, tablets integrated into the back of the front seats, wireless induction charging for compatible smartphones, support for in-car Apple software and Google CarPlay and music streaming from Napster or Aupeo, it feels like a suitable car for this day and age.

Driving-wise, things aren’t so far apart anymore. The Mercedes-Benz’s suspension has received some fine tuning which makes the car both more agile and more comfortable due to a combination of adaptive dampers and air suspension. It also comes with off-road programs, even though few people will actually use them. The Audi Q7 is a close match, but not quite as good – still, a tremendous improvement over the old generation.

So, which is the best? Hard to say since they’re so different, despite the similarities in engine and price (only 150 euros separate the three liter diesels in Germany). The Mercedes-Benz remains the comfort king, but the Audi Q7 might just be the better allrounder. At least until the new GLE comes out…