Mercedes-Benz GLC Coupe – In its element on any terrain

The Mercedes-Benz GLC Coupe has joined the big happy family of the Stuttgart-made SUVs this year. Its creators have aligned the three pointed star next to the three Michelin stars achieved by the Spanish chef Dabiz Munoz.

The campaign brings to the screens a short video starring the famous Spanish chef and the GLC Coupe. Combining the intimidating stance of an SUV with the dynamics of a Coupe, GLC meets the Madrid-based enfant terrible of the world of Asian and Mediterranean cuisine, blending their personalities to create new experiences. It all happens within the international SUV “In its element on any terrain” campaign. “Take the cold and make it hot”, the chef says from behind his steaming oven, before getting behind the wheel of the hot new high-ride coupe. 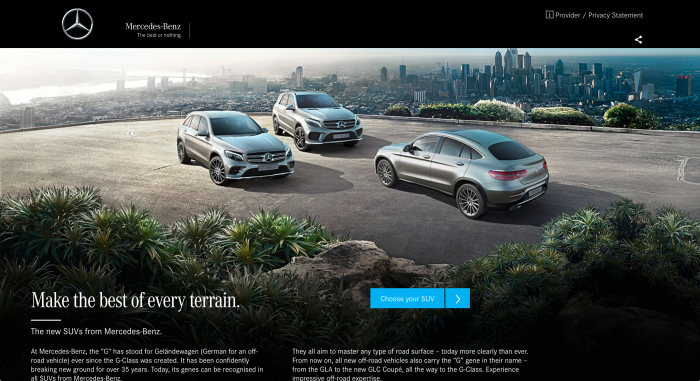 The 95-second video will be accompanied by print visuals displaying the SUV Coupe in urban settings, but also off the tarmac.

A behind-the-scenes video will also be launched for the curious and scrutinizing looks of the model’s fans, together with further information and bonus material. A 15-second film shot especially for Instagram will find its way to the social network enthusiasts.

The campaign mainly aims at the urban, predominantly male target group, in the prime of life, trendsetting millennials, whose personalities match that of the dynamic elegant SUV Coupe. The advertising campaign has been conceived, designed and managed by the Antoni publishing agency.