Mercedes-Benz GLB first teaser. When will it arrive in showrooms?

Mercedes-Benz GLB shows up in the first official teaser, two months after it was introduced in a concept variant at the Shanghai Motor Show. The series production model is set to be shown this summer, with its public debut likely to happen at the Frankfurt Motor Show.

The company’s first compact seven-seater will slot between the GLA and the GLC in terms of proportions and equipment. The teaser image shows a glimpse of the interior and of the rear end, with horizontal slender taillights. The photo posted on social media is accompanied by a description that claims that the Mercedes-Benz GLB is “intelligent like a smartphone and as practical as a multitool!”.

As the spy shots have previously shown, the series production model echoes the concept with a rounded-shaped front bumper, a radiator grille with two slats and angular headlights. Plastic body cladding and a roof rack confirm its adventurous nature and position it closer to the GLS SUV. 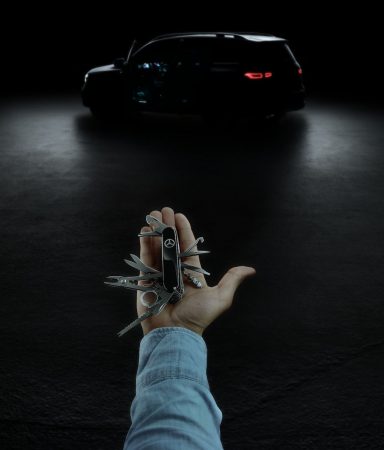 Engine options of the car that will be built in Asia, should be those provided by the MFA2 platform. Therefore, the 2.0-liter four-cylinder diesel with 150 PS and 190 PS, respectively, should find room under the bonnet. The petrol range would include a 2.0-liter four-cylinder unit of 190 and 224 PS respectively. The car is expected to arrive in showrooms this upcoming winter.

The spy photographers have already caught the GLB 35, that will come with 306 PS and 400 Nm of torque, testing in Germany. A GLB 45 variant will also be part of the range, with the S model going as high as 421 PS. An electric model will be on the market as soon as 2021.