Mercedes-Benz is the world’s first carmaker that gets internationally valid system approval for conditionally automated driving. The German Federal Motor Transport Authority (KBA) has granted approval for the system.

It is a first in 136 years of automotive history. The premium company complies with the demanding requirements of UN-R157 for a Level 3 system. To support autonomous driving, Germany opened the Road Traffic Act for Level 3 systems back in 2017. It was the world’s first country to create a legal basis for the intended use of these innovative systems.

How does the Mercedes-Benz automated driving actually work?

Therefore the S-Class luxury sedan equipped with DRIVE PILOT will be able to roll there, starting the first half of 2022, with conditionally automated mode engaged, at speed of up to 60 km/h in heavy traffic or congested situations. Meanwhile, the driver will be able – Mercedes claims – to pay attention to online shopping or write emails. DRIVE PILOT can take over driving after the one behind the wheel turns it on. The controls are located in the steering wheel rim, on the left and right, above the thumb recesses. 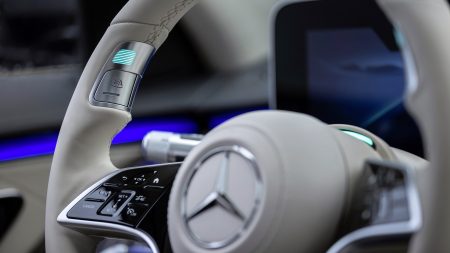 The car will be able to control the speed and the distance to the vehicle in front, but also stay within the lane. The system identifies traffic signs and speed limits and acts accordingly. It also reacts to unexpected traffic situations, braking or avoiding obstacles or evasive maneuvers performed by other drivers.

The driver will be able to take control of the car whenever he or she wants to do that. The system will hand over control to the driver at certain moments. If the driver fails to react even after urgent prompting, the system will safely stop the car and turn on hazard warning lights. Furthermore, it will initiate an emergency call and it will unlock the doors and windows to make access easier for first responders.

The EQS electric sedan will also benefit from the presence of the Level 3 automated system. Drive Pilot will be able to cover 13,191 kilometers of motorway across Germany. Testing is already underway. USA and China might follow, but first, these countries need the legal framework for automated operation.