Mercedes-Benz gets onboard with Alex Thomson Racing

There must be something about power and leisure boats that attracts Mercedes-Benz like a magnet. Once the premium car manufacturer is dragged out at sea, it stops at nothing. Alex Thomson Racing must know that, because the racing squad has just teamed up with the car maker.

Mercedes-Benz has become the new co-sponsor and tech partner for Alex Thompson Racing, one of the best racing teams in the Ocean Masters World Championship. The new yacht that joins the races this month, for the Transat Jacque Vabre Race, is entirely made of carbon fiber with a nomex core. Mercedes-Benz also brought the company’s expertise into the paint-finishing with the infrared-reflective effect. It significantly reduces temperatures onboard, even though it is completely black. 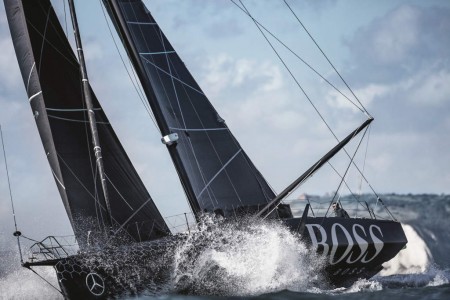 The black paint developed by BASF in collaboration with Mercedes-Benz reflects infrared radiation, preventing the inside of the yacht from heating up too much. As a consequence, the fibre composites of the hull of the yacht are exposed to significantly lower temperatures, protecting the hull structure from direct sunlight.

“This paint based on functional pigments is not just suitable for yachts and ships, but also highly interesting to the automotive sector. Our intention is to use it on various models over the next few years,” says Martin Bremer, Head of Colour and Trim, Mercedes-Benz Design. Lower interior temperatures determine lower requirement for cooling by the air conditioning system. This will have a particularly positive effect on fuel consumption, reducing vehicles’ CO2 emissions as well. 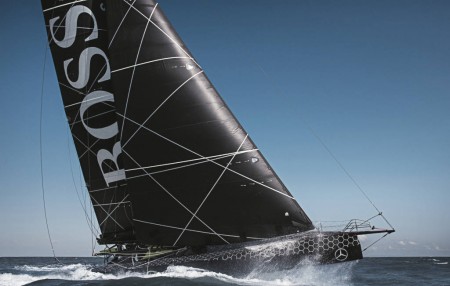 The sea-racing team is welcoming Mercedes-Benz out on the rough seas.

“Having Mercedes-Benz as a core partner of our team is a big step forward for us in terms of marketing and partnerships, but also in terms of using the incredible Mercedes-Benz expertise and technology innovation in one of the world’s most demanding technical sports”, says Stewart Hosford, Managing Director at Alex Thomson Racing.

The IMOCA 60 racing yacht HUGO BOSS will sail for the world title in the Ocean Masters Championships – a racing calendar reserved for the world’s most cutting edge sailing yachts. 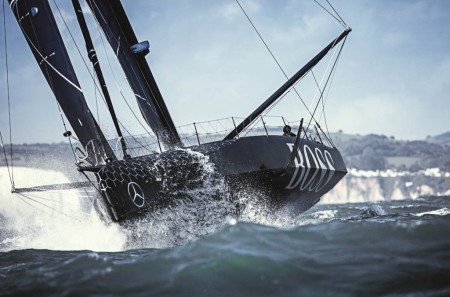 Alex Thomson was the youngest yachtsman to ever win a round-the-world race. When he triumphed in the Clipper Round the World Race in 1998/99, he set a record he still holds today. Back then, he was just 16.

Later on, in 2003, Thomson made a spectacular debut in the world of solo sailing by breaking the distance world record.

Five years later, he claimed second position in the Barcelona World Race, setting his second distance world record in a monohull. Afterwards, he took on a great challenge: the world’s toughest single-handed yachting race, the Vendée Globe, in which the competitors sail 26,000 nautical miles (46,300 km) nonstop around the world.