The Mercedes-Benz G-Class is indeed a very potent car, easily outperforming rivals in the offroad. But some may think that the offroad is equivalent with the off-land. A driver from Ukraine tested his G-Class in the water.

This past weekend, the brave (or should we call him „brainless”?) driver took his boxy undeniably powerful G Wagon to the „Sauvignon” beach in Odessa, for a couple of drifts. Happy and proud that his offroader can easily tackle the beach sand dunes, the driver rushed straight into the waves of the Black Sea. Little did he know about amphibians. But he surely knows now that the G is not one of them. 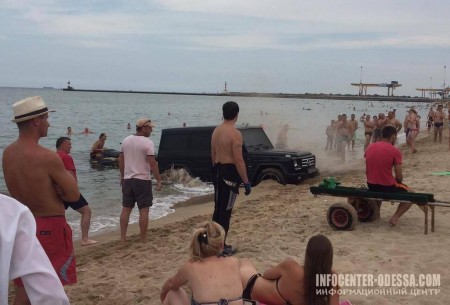 According to the tourists sunbathing on the beach, the reckless driver jumped into the water begged for help. Luckily, he was saved by the driver of a Land Rover, who towed the G stuck in sand and water. The towing cable broke twice, but eventually managed to pull it out out of the claws of hell and put it back on the… beaten track.

After the failed attempt to test it in water, the driver reached his conclusion: yeah, cars don’t swim, even if they’ve got the Mercedes star in the radiator grille and the G-Class designation on the back.

The witnesses could not have let this pass without taking photos of the unforgettable event and posting them all over social networks.