The Land Rover Defender is the new kid in town. Or better said, in the land of the almighty off-roaders where the Mercedes-Benz G-Class has been throwing a party generation after generation. The two iconic models now fight in a weird pulling challenge.

The Mercedes-Benz G-Class and the Land Rover Defender are face to face on an airfield. No, it’s not that type of fight, not a drag race. It would be irrelevant, because that is not what the two are made for. 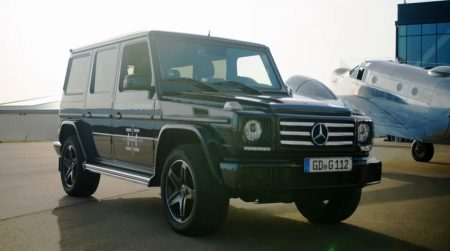 They are not made for pulling World War II bombers either, but that’s a whole other issue. They are there already, ready to move the airplane. And that’s not all. They must do it with grace and precision, pulling as close as possible to an oil barrel. We are incapable of understanding why the exposure to the danger, but probably the tension building up due to the risk of the move is getting more views on YouTube. Carwow.de, the German branch of the famous Carwow, has pulled the trick.

They remind viewers that they had promised this pulling challenge between the Mercedes-Benz G-Class and the Land Rover Defender a long time ago.

The distance the two have to cover is 100 meters before braking as close as possible to the oil barrel, after pulling the heavy load in the shape of the WWII bomber, Dean Malay explains at the beginning of the 9-minute video. 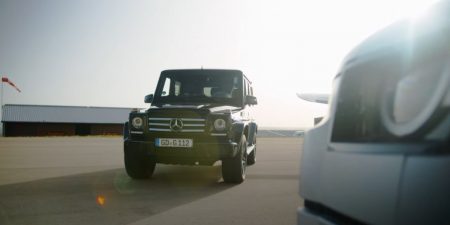 The G-Class completed the first attempt in 46.25 seconds. It was almost 10 seconds faster on a second try, at 37.94 seconds, coming to a halt just about 3 centimeters from the oil barrel. Dean Malay has space for two fingers in there.

With an already experienced Malay behind the steering wheel, it is easy for the Defender to reach the red barrel in just 34.02 seconds the first time and in 30.82 seconds the second time. But the car stopped further from the target. So which one is the winner?