The first moment you set your eyes on the Mercedes-Benz G 63 AMG 6×6 you knew this was going to be a favorite among the tuning industry and, confirming your hunch, here is Mansory with a ridiculous transformation for the already pretty ridiculous 6×6 truck.

The first thing you should notice is the carbon fiber bodykit that can be left unpainted, or can covered in the same colour as the rest of the body. In this case before you, somebody timely decided there was enough yellow already for a car this size and the wheel arches and sills were thankfully left in their natural grey tone.

The front end of the behemoth did not escape untouched and so now features a new skirt with integrated LED daytime running lights which is continued upward with an overlaid mask covering surrounding the radiator grille and headlights. The material used is, of course, carbon fiber.

The long bonnet of the G 63 AMG 6×6 is now made of carbon fiber as well and features air vents to better cool off the engine. The cluster of four addition lights mounted above the windshield is hard to miss even in broad daylight and, we can imagine, can become down right blinding when approaching from the opposite lane at night. 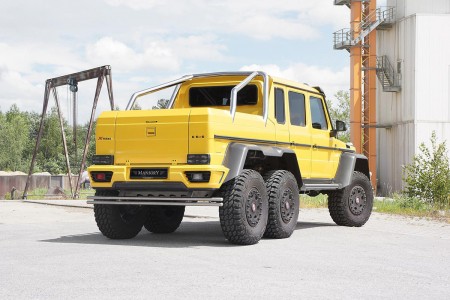 Mansory did not limit itself to carbon fiber trickery, but also got their hands dirty inside the engine bay. The 5.5 liter V8 engine now develops a whooping 840 hp and 1.000 Nm, a significant increase over the standard 544 hp and 758 Nm.

The price for this conversion is unknown and, frankly, it’s also irrelevant. Mercedes-Benz has built a very small number of G 63 AMG 6x6s and the few people who own them are not the kind of people to worry about such unimportant matters like money. 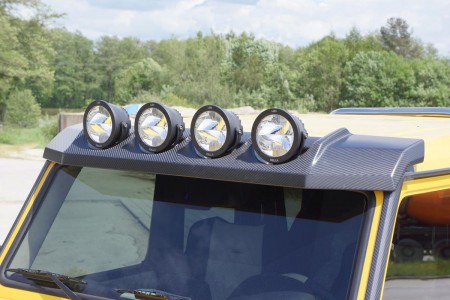 If you ask us, there’s no point in tuning an already rare and exclusive car, especially when the tuning package is… controversial, to say the least. This Mansory approach, with the yellow paint and the added trim makes the Mercedes-Benz G 63 AMG 6×6 look a bit silly, like a child who’s outgrown too quickly and is confused about the age of children he should play with. I would only see it fit in on a beach, as a rescue vehicle. Probably in the Middle-east…