Mercedes-Benz Future 2025 Truck in the Present

We like it or not, future will bring different types of transport solutions. In five years from now, passenger cars will be autonomous and trucks will follow them other five years later. Mercedes-Benz already show the Future Truck 2025 at IAA 2014.

Right now, if you want, it is possible to order an Actros with so many safety systems that it is complicated to name it all. Predictive Powertrain Control, Proximity Control Assist, Stability Control Assist, Lane Keeping Assist, Active Brake Assist 3 or Autonomous Emergency Brake System are on the list. And for comfort, you can mark the SoloStar Concept, 3000 Actros drivers are already enjoying this new feature. But this is the Mercedes-Benz Future Truck 2025, all hardware is there! The President of Volvo Trucks said some time, that the FH truck has so many computers like an airplane, no doubt that the Actros (the current Actros) offers the same. What is still missing is a servomotor on the steering column and some communication between your Actros and the outside world. OK, plus some extra software! 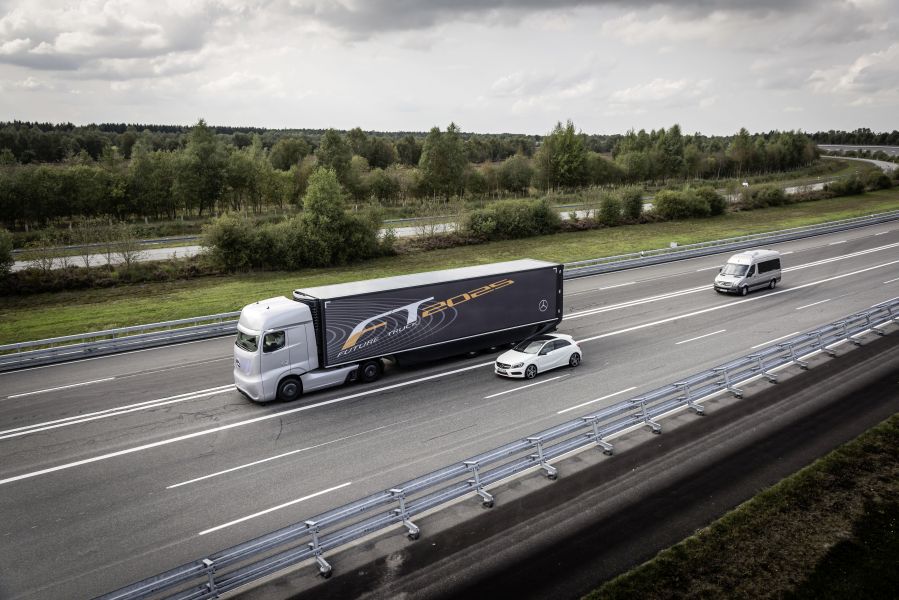 Mercedes-Benz “scientists” are doing their jobs well and the truck could run autonomously. I have seen this, last July, in realistic traffic situations at speeds of up to 80 km/h, on a closed section of the A14 autobahn in Magdeburg, Germany. This is not a new truck, but rather the transport system of the future – developed as part of the Shaping Future Transportation initiative by Daimler Trucks to conserve resources, reduce emissions of all kinds and, at the same time, ensure the highest possible level of traffic safety. One executive has stated, in a press conference, something like this: “If you want to know your future, you have to build it up”.

SF for the 1968 Vienna Convention

Daimler technology is more or less ready from now and the authorities have to get involve. First of all, this truck is illegal. The technical preconditions are now being demonstrated for the first time with the Mercedes-Benz Future Truck 2025; however, the legislation also needs to be adapted to this new dimension in driving. A further development of the “1968 Vienna Convention on Road Traffic”, which almost all European countries have signed and implemented, is already under way. The Convention is intended to make road traffic safer by standardizing regulations, and one of its core principles is that the driver must have control of the vehicle at all times and in all circumstances. On the basis of the Vienna Convention on Road Traffic, UN/ECE Regulation R 79 does permit corrective steering intervention for steering systems, but not automatic steering over 10 km/h. This allowance is a precondition for Parking Assist and Stop-and-Go Assist. The Vienna Convention came about at a time when autonomous driving was still in the realms of science fiction. The USA was never a signatory to the Vienna Convention on Road Traffic. In several federal states, it has therefore been possible to formulate regulations at least for trial operation of autonomous vehicles on public roads. A committee of United Nations experts has recently supplemented the Vienna Convention on Road Traffic, providing the basis for legalization of autonomous driving. Corresponding systems will be permitted in the future, as long as they can be deactivated or overruled by the driver at any time. This is part of the standard programming for the “Highway Pilot” in the Mercedes-Benz Future Truck 2025. 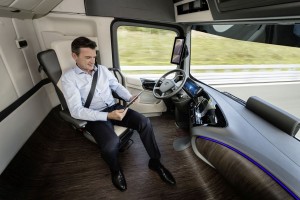 In July, Daimler has showed us only a quite normal Actros with a camouflage cab. Now, at IAA, the thrilling exterior and interior of the same vehicle are being revealed. The tractor unit combined with an aerodynamically optimized trailer celebrates its world premiere as a study at the International Commercial Vehicles show. The Mercedes-Benz Future Truck 2025 provides a glimpse of the future shape of trucks.

Forget about the cab silhouette and lighting system – it is just a concept truck, we will see in future how close it will be to reality. A lot of things could change in ten years of professional design. This fabulous truck can be loved or hated, but to realize it, Mercedes-Benz connects existing assistance systems with enhanced sensors to the “Highway Pilot” system.

A radar sensor in the lower area of the front end scans the road ahead at long and short range. The first has a range of 250 meters and scans an 18-degree segment and the second – a range of 70 meters and scans a 130-degree segment. The radar sensor is the basis for the proximity control and emergency braking safety systems already available today.

A stereo camera installed above the instrument support behind the windscreen keeps the area ahead of the vehicle in view. This is currently the location of a mono-camera if the optional Lane Keeping Assist is ordered. The range of the stereo camera is 100 meters, and it scans an area of 45 degrees horizontally and 27 degrees vertically. This stereo camera identifies pedestrians, moving and stationary objects. It recognizes everything that contrasts with the background, and is therefore, also able to measure clearances precisely and it registers the information on traffic signs including lane markings.

Radar sensors, installed in the sides, monitor the road surface to the left and to the right of the truck. They are located on both sides ahead of the tractor unit’s rear axle. The sensors have a range of 60 meters and cover an angle of 170 degrees in the longitudinal direction.

In the near future, every vehicle will transmit continuous information to its surroundings. This includes vehicle position and model, dimensions, direction of travel and speed, any acceleration or braking maneuvers and the band negotiated. The frequency of these information transfer depends on the vehicle speed and the intensity of any changes in its movement. It varies between one message per second when cruising, to ten times this interval when changes are significant. Transmission is via WLAN technology, using the standard Europe-wide G5 frequency of 5.9 gigahertz. The basis is the ITS Vehicle Station (Intelligent Transport Systems and Services) on board the vehicle. The range of continuous sent messages is a radius of around 500 meters. The vehicles inform each other about their movements, so that they can respond to them immediately in anticipatory mode. V2V and V2I networking are keys to success of the “Highway Pilot.”

In the future, the traffic will flow more smoothly, predictably and safely. Traffic systems will become more flexible, with better use of the infrastructure. Avoidance of human error at the steering wheel will reduce hazards and accidents. Transport operators will operate more cost-effectively and flexibly. Truck drivers will be able to assume different tasks as transport managers. This answer to the many challenges is not just a vision, it is already reality.