A spectacular incident took place in Los Angeles. A Mercedes-Benz flew off a bridge, crashed into trees and burst into flames. Fire fighters managed to pull the driver out of the burning car. He survived the horror crash.

“Mercedes-Benz cars are practically tanks”, people used to say. And apparently, they were right. The driver of a black Mercedes-Benz E-Class lost control and flew off an overpass in downtown Loss Angeles, on the 110 Freeway. The car crashed into several trees before it hit the ground and immediately caught fire. The driver was unconscious in his sett. The crash reportedly happened around 10:50 p.m, near the Sixth Street exit according to the California Highway Patrol. 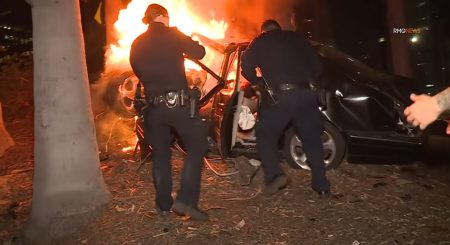 A dashcam of a car driving on the freeway caught the whole incident. The driver, Fernindo Salazar, pulled over and tried to help the driver out. “It started catching on fire right way,” Salazar said in an interview with NBC Los Angeles. “I was trying to pull him out. He had his seat belt on. He was trapped inside, so it was hard to get him out”, Fernindo recalls.

The driver is in critical condition and his car was totaled

Dramatic footage shows that firefighters and police officers eventually managed to pull the 48-year old driver out of the wrecked Benz. The ambulance took him to hospital with severe burns and injuries, according to Margaret Stewart of the Los Angeles Fire Department. Unofficial sources claim that his condition is now stable. 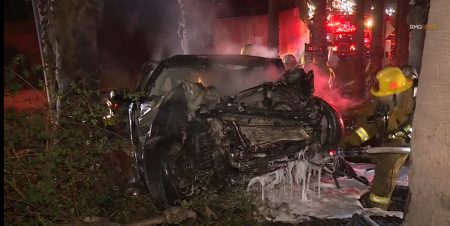 Authorities started an investigation to establish what exactly caused the driver to lose control of his car. Witnesses say that he was traveling at his speed before he slammed into the guardrail and took off. The front and rear ends of the car suffered massive damage. Most probably, the vehicle is a writeoff. No other person was onboard at the moment of the crash.