The future has just driven through San Francisco. The driverless concept Mercedes-Benz F 015 Luxury in Motion, launched in Las Vegas this past January, has rolled out of its promotional video and wandered in California.

Even though it was silently rolling in California, the UFO-looking car still managed to draw attention. The Mercedes-Benz F 015 Luxury in Motion has been spotted street-advertising itself in San Francisco. Thousands of pedestrians snapped pictures of it, so the social media is already full of images of the Mercedes-Benz F 015 Luxury in Motion, with people calling it “radical” or “really cool”.

The sleek mind-blowing car with a futuristic silver exterior, but no visible cameras, nor radars, does not let the eyes of the curious to snoop in. The transparency of its side windows or windshield is zero! And from the lounge-like area, the occupants do not need to see outside, as the “brain” of the car displays all the necessary information. When the vehicle is self-driving, its LED headlights flash messages to the pedestrians so they know when they can cross the street. 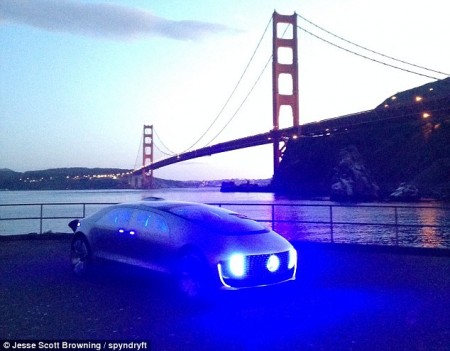 There is no information regarding the driving of the vehicle with no side-view mirrors, so we can only guess it’s running on itself, but having a driver for a back up and probably “passengers” in the lounge area to provide a feedback for the interaction in traffic conditions.

The innovative concept, made of carbon fibre, aluminium and high-strength steel, is able to run about 1100 km (683 miles) with a single “tank”: it’s got an electric hybrid system that is provided with 200 km from the battery and the other 900 are courtesy of the electricity of its fuel cell.