The Mercedes-Benz EQC shows derriere in new teaser, a month and a bit prior to its debut set for Sweden, next month, a month before arriving in Paris, for the Mondial de l’Automobile. The short video adds up to the already existing pieces of the EQC puzzle.

After showing the LED headlights of the electric crossover, connected via an LED strip, Mercedes-Benz goes a step further and provides a glimpse of the rear. We also find LEDs there, connected via a thin light strip, similar to that present at the Generation EQ concept, but unlike any other model of the Germans’ portofolio.

But the strip seems to turn into a leitmotif of the electric crossovers, since the Tesla Model X, the Audi e-tron and the Jaguar I-Pace feature one as well, stretching from one headlight to another. 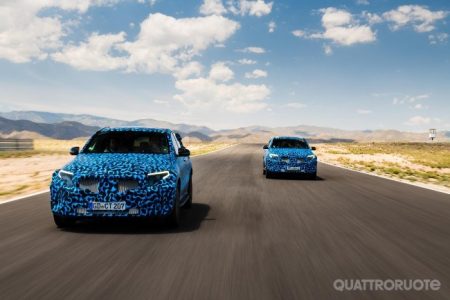 The premium car company has set the debut for its brand-new electric family for Stockholm, on September 4th, one week from today exactly. The full specifications of the electric car should also be released then.

So far, little do we know about the first car designed by Mercedes to be fully electric. An output of 300 kW (402 horsepower) and a range of up to 500 kilometers (310 miles) were indicated for the series production model, that was before switching to the new WLTP standards, starting September 1st. These figures, together with a torque of 700 Nm, would be similar to those of the Generation EQ concept, presented nearly a year ago. Generation EQ featured a battery with a capacity of 70 kWh.