The Mercedes-Benz E-Class is getting one step ahead in autonomous driving, even before the world premiere of the vehicle, set to take place next week, in Detroit. Daimler’s latest limousine was granted an autonomous driving license for the state of Nevada.

The Mercedes-Benz E-Class is the first ever standard production vehicle to get the autonomous driving license in Nevada. Even though three such vehicles already got the license, Mercedes-Benz mentions various terms that they must get in order first, before they get the allowed cars on the road.

One of the conditions required would be the permanent presence of two people inside the vehicle, with one person sitting behind the wheel, since the human driver must perform turns, get on and off the highways.

Further testing will be carried out through everyday traffic. To make the vehicles easy to be identified, they will all be bearing red number plates, especially issued for autonomous driving cars. 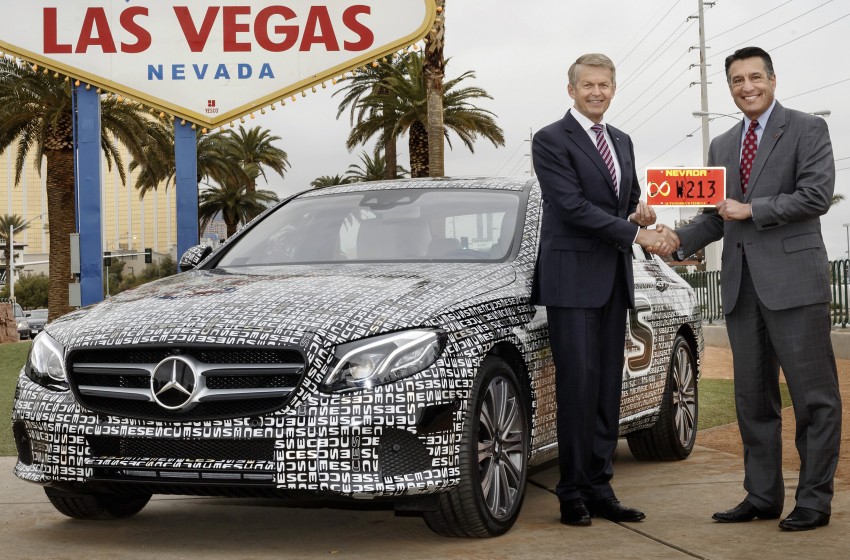 Only minor “software modifications to the Drive Control Unit” must be carried out, but the changes will not focus on the steering wheel, nor on the ESP system.

“The fact that Mercedes-Benz is the world’s first vehicle manufacturer to be awarded such a license shows that we are a step ahead when it comes to autonomous driving. The new E-Class is therefore another big step to the fully automated vehicle”, said Thomas Weber, Daimler member of the board of management.

The 2016 Mercedes-Benz E-Class will take center stage in Detroit, at the 2016’s first auto show.

Nevada is a very welcoming territory for Daimler’s autonomous driving projects. Since May 2015, the company has been testing two self-driving trucks.