Mercedes-Benz E-Class spied again, this time while testing on snow

After the previous sets of spy-photos showing the new Mercedes-Benz E-Class under heavy camouflage spread across the internet, photographers have caught the saloon undergoing tests on snow-covered surfaces.

We’ve been seeing spy-photos showing the new E-Class under heavy camouflage for a while now, after the German saloon was spotted by fotographers back in September and early December.

Now, the upcoming E-Class has been caught while undergoing tests on snow in Sweden. As you already know, just as the new C-Class, the upcoming Mercedes-Benz E-Class is developed on Mercedes’ MRA (Modular Rear Architecture) platform.

However, the E-Class is expected to be larger than the C-Class and obviously smaller than the S-Class, while being lighter that its predecessor, thanks to the use of aluminium.

The size growth will also impact the mid-size luxury sedan’s wheelbase, which will gain some extra length, and therefore providing more space for the rear seat occupants.

Aside from the station wagon, coupe and convertible, the E-Class also serves as a base for the car that popularised the four-door coupe segment, the CLS. As with the current model, the next CLS (third generation) should be offered in coupe and shooting brake form. 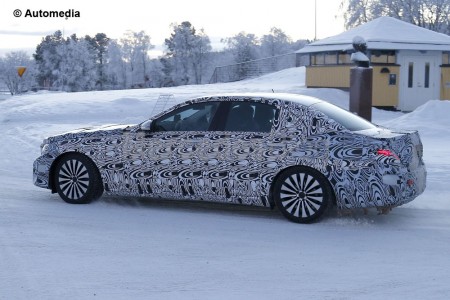 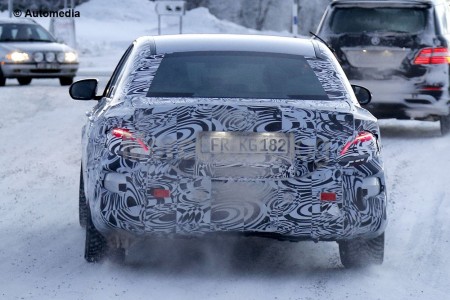 In terms of engines, at the base of the 2017 E-Class line-up we’ll find new three- and four-cylinder engines, while rumours talk about the German carmaker returning to straight six engines – just like the new AMG twin-turbo 4.0-litre V8 is made of two 2.0-litre 4-cylinder AMG blocks, the straight six will share parts with the 3- and 4-pot mills.

Speaking of the AMG, we’ll see the new 4.0-litre V8 in the next E63 AMG. Once again, the Affalterbach machine will receive all-wheel drive as an option, while the S model will also be offered.