The 2019 Mercedes-Benz CLS is expected to make its debut at the Los Angeles motor show in exactly ten days from now. Before that moment comes, Mercedes is teasing the company’s four-door coupe with a photo that shows a candy-red car on a candy-red background.

The single image shows the front fascia of the Mercedes-Benz CLS, with LED V-shaped running lights flanking the grille with the centrally positioned three-pointed star supported by a single louver.

From the spy photos previously seen, one thing is clear: the CLS is set to retain the sloping roofline descending to the rear and probably the company’s trademark diamond radiator grille. Even though it stands as an E-Class derive, the CLS will not switch to the CLE designation as temporarily rumored, but instead keep its already familiar and popular name. The fastback sedan will be based on the MRA architecture, the same platform that the C- and the E-Class are built, but will feature a lower and wider stance, together with the coupe-like frameless side windows.

Under the redesigned hood, there will be room for a turbocharged 3.0-liter inline-6. The debut of the four-door coupe marks the return to s traight 6-cylinder engine layout in the range of the premium car maker. Mercedes has already axed the Shooting Brake variant, so we won’t be seeing a CLS wagon ever again.

Inside, the CLS will display the dual screen layout that made its debut with the E-Class business sedan and air vents similar to what we have seen in the spy photos of the G-Class dashboard. 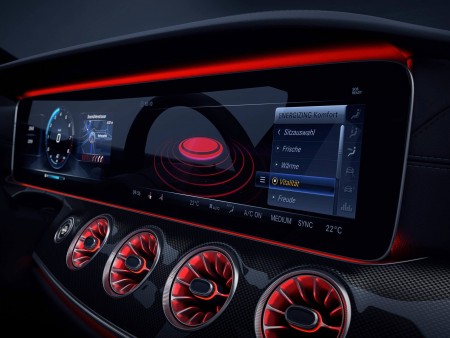 A hyped-up Mercedes-AMG CLS53 (yes, you read that well) will join the lineup later on, set to take the place of the CLS63. The CLS will also be available with a 4MATIC four-wheel drive