Mercedes-Benz Classic steals the show at Techno Classica in Essen

It’s hard to believe that 60 years have passed since Sir Stirling Moss won the Mille Miglia race in  Italy in the iconic Mercedes-Benz 300 SLR with the starting number 722. His time for completing the 1.000 mile race has remained the best ever since, which is a tremendous testimony of his racing skills and the car’s capabilities.

His winning car will be the main center point of the Mercedes-Benz Classic stand at the Techno Classica show which will open its gates on the 15th of April in Essen, Germany. This 300 SLR was so successful that after Mercedes-Benz decided to discontinue the model, people started building their own based on the somewhat similar 300 SL street version.

“In the history of our brand, the outstanding culture of innovation at Mercedes-Benz goes hand in hand with unique successes in motor sport. This is reflected in the main focuses of our appearance at the Techno Classica in hall 1 of the Messe Essen exhibition centre,” says Michael Bock, Head of Mercedes-Benz Classic and Customer Centre. “As one of the world’s leading events dedicated to vintage and classic vehicles, the Techno Classica provides an appropriate setting in which to present the legendary car that won the 1955 Mille Miglia and an exclusive line-up of seven original Mercedes-Benz vehicles which set new standards for aerodynamics in their respective eras.” 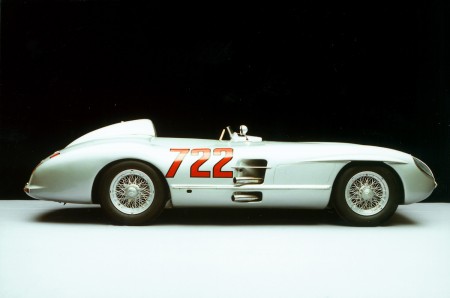 The other highlight of the Mercedes-Benz Classic at the Techno Classica will be a history of the company’s unique streamlined car designs, with no less than seven sporty examples flashing their shiny paint inside the Messe Essen exhibition. They range from the “Blitzen Benz” from 1909 to the best current example, the CLA 45 AMG Shooting Brake.

Apart from the Benz 200 HP, which got the “Blitzen Benz” nickname for obvious reasons, Mercedes-Benz Classic will also be bringing along subsequent one-off cars that were later produced with just one goal in mind: to beat the land speed record. With the twelve-cylinder record-breaking car of 1936 which was developed on the basis of the W 25 Grand Prix racing car, Rudolf Caracciola attained a top speed of 372.1 km/h. Four decades later, in 1978, the Mercedes-Benz engineers refined the C 111 research vehicle dating from 1969 to produce the C 111-III record-breaking car, which set nine absolute world records in Nardò, Italy, with its five-cylinder diesel engine. 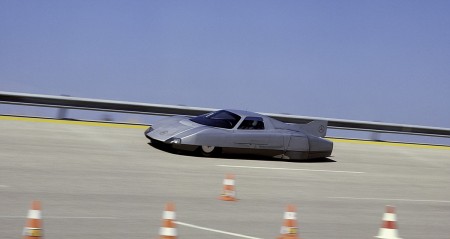 Another important model in the Mercedes-Benz history of aerodynamic cars was the Mercedes-Benz 540 K Streamliner (W29), which was based on the top of the line sports car of that time. It was just a research project, but with its excellent drag coefficient of just cd=0.36 it helped engineers implement their finding in the future Mercedes-Benz products.

Products like the world famous Silver Arrows, the racing cars that dominated the motorsport scene during 1954 and 1955, but also series models like the E 500 (W124) or the all too familiar CLA 45 AMG Shooting Brake. It’s cars like these last two that really show how core strengths from the brand’s history point towards the future of Mercedes-Benz.

The Techno Classica is open from 15 to 19 of April 2015 and is held at the Messe Essen exhibition center.