Mercedes-Benz has already announced the expansion of the company’s compact family. But what if one of the new members would be an A-Class Coupe. Digital artist X-Tomi Design came up with the idea.

The production of the new A-Class hatchback has started last month. April also saw the A-Class L Sedan being presented at the Beijing Motor Show. The Stuttgart-based car maker has announced seven more compact cars are coming. So before we see them hitting the road, at least we can dream of an A-Class Coupe.

Built on the company’s Modular Front Architecture (MFA), on which the B-Class, the CLA, the CLA Shooting Brake and the GLA are also based, the A-Class could spawn more models. Mercedes-Benz has already sent into the world five of the models, but what about the other three that are part of the plan? X-Tomi Design found inspiration in the front fascia styling of the A-Class and the side and rear lines of the C-Class, shrinking it to fit the compact silhouette of the hatchback converted into a coupe. And we must admit: it does not look bad at all.

There is no hint from Mercedes regarding an A-Class Coupe. The premium car maker has only announced plans regarding the A45 model, with a brand-new turbocharged 2.0-liter engine capable of developing a bit over 400 horsepower, an output delivered to all wheels via a newly developed 4Matic all-drive system. 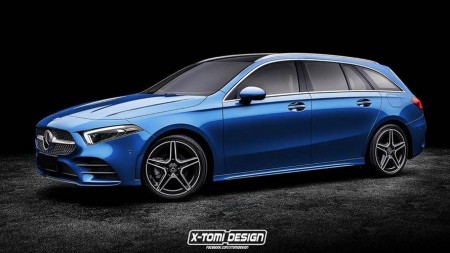 X-Tomi Design would stop at nothing with his imagination. He also digitally rendered a wagon version of the A-Class compact. With the stretched wheelbase, the estate version looks a bit odd, but it would satisfy the needs of an A-Class enthusiast with a family to drive to a holiday destination.