Mercedes-Benz CLA With Strange Body Kit – Out of a Video Game or Out of Hell?

Elena Luchian, April 25, 2022
2.43K 0
Home Mercedes Benz CLA-Class Mercedes-Benz CLA With Strange Body Kit – Out of a Video Game or Out of Hell?

A strange-looking Mercedes-Benz CLA showed up on Reddit and sparked interesting conversation. The car looks as if it just came out of a video game. “Or hell”, some would say.

The CLA showed up in the “Sh****_Car_Mods” section. So we know what people think of it right from the very start. The model shows up in four different photos. The first two show it covered in dust in what seems to be an underground car park, with no license plate at the front end.

The next two photos place it in some other car park, but this time, out in the sun. It seems like it got rid of the thick layer of dust and the black paintwork shines in the natural light. So does the extra wide body kit, that makes us wonder: is a lane enough for this contraption or does it need the extra half from the neighboring lane?

The Mercedes-Benz CLA got new fenders, sills and a redesigned bumper. The vertical slats of the radiator grille are spaced out and support a blacked-out three-pointed star in the center. There is a hood that is far from stock and we can expect outrageous mods at the rear as well. But the photographer leaves that all to imagination. All we can spot from back there is a rear wing for some extra downforce and better airflow. 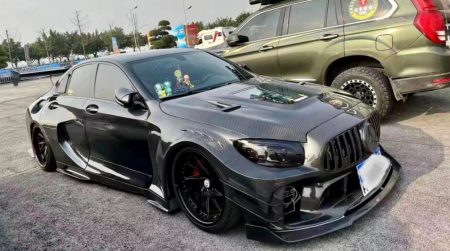 And the owner of the car seems to have a strange sense of humor. There are cartoon-ized little men flanking the front splitter, with hearts instead of eyes. Excuse us, we thought they were trying to escape, but the heart-eyes change everything.

“If I bought my kid a CLA and he did this to it, he’d be on the bus the next day,” says one of the Reddit users. “Someone’s been playing too much GTA,” another one assumes.

Whatever this car comes from, better these changes would be reversible.