Launched in 1995, the Mercedes-Benz Sprinter marked the start of a new era for vans. It quickly became synonymous with the best-possible van with a gross vehicle weight of around 3.5 t.

To date, some 2.9 million Sprinter models have been built which are in service in over 150 markets worldwide. To mark the anniversary of its best-seller, Mercedes-Benz has brought out a highly attractive special model – the exclusively equipped “Edition Sprinter”.

Set to go on sale in 19 countries in Europe, from Sweden to Spain and from France to Hungary, the special anniversary model is limited to a run of 2000 units. 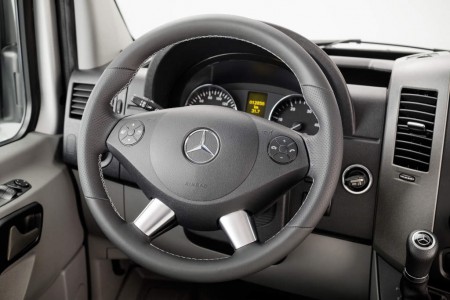 Design-wise, the Mercedes-Benz Edition Sprinter features bi-xenon headlamps and a chromed radiator grille with “Edition Sprinter” lettering on the flank as a clear sign of the model’s special status. Inside, the special model brings floor mats with exclusive “Edition Sprinter” labelling, a top-class leather steering wheel plus dark-tinted windows in the rear.

What are the engines available for the Edition Sprinter?

All engine variants are available. The “Edition Sprinter” is available for the panel van and crewbus variants in the colour brilliant silver metallic. The Edition model’s bumpers wear the same colour – a first for the Sprinter. In Germany, the “Edition Sprinter” package in panel van guise starts at 2300 euros (plus VAT). This equals a price saving of 50 percent.