Mercedes-Benz C-Class is dominating most of the comparison tests these days. It’s time for the unusual suspects to contest the German’s reign. Autobild.de pits the C 220 against the all-new Jaguar XE 20d and the Infiniti Q50 2.2d.

If the somewhat aloof Japanese sedan is clearly an outsider here, the British rival is far closer than you’d think to the aura of mighty ruler the C-Class posseses. Jaguar tries to reinvent itself and break from the luxury cage in which the brand was imprisoned for many years. For this, the XE must be technically convincing and add some.

With a subtle twist, Jaguar has ditched its previous Ford sourced technology and went full throttle with an all-new modular platform carved from fancy aluminum in similar fashion to the body itself. The engines have also been developed from scratch.

The budget brand philosophy governing Jaguar’s Indian owner Tata seem to have trickled down to Jaguar too, though. Acres of hollow sounding hard plastic, too flexible, unclean fitted trim parts, sharp-edged mold lines … sorry, but this is not befit of the Jaguar tag.

Even the Infiniti manages to outshine the Jaguar and to deliver a generous decked “Sport Tech” layout for the interior. Surprisingly, at 51.350 Euros the Japanese sedan is the most expensive car here. Upon closer inspection, the Q50 doesn’t quite as accomplished as the Mercedes with the fussy exterior lines and the colorful cockpit clutter to blame. 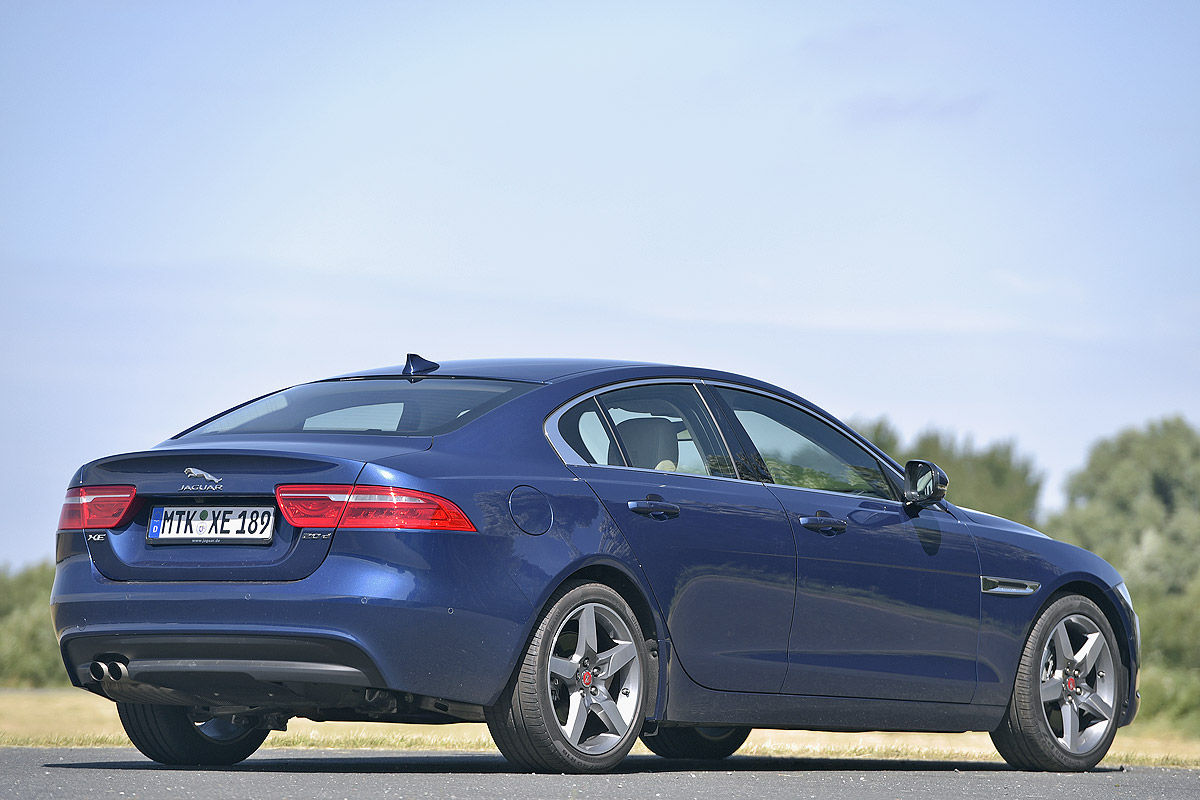 Here comes the big question. Can the Jaguar at least eclipse the C-Class in therms of sportiness? Well, we’d say so. Its 180 hp, meaty-sounding, but never cheeky Diesel is bursting with power, complemented by an equally sublime eight-speed ZF automatic transmission. Top technology then. The transmission responds to throttle commands with blistering fast downshift times, but comes after it afloat again in the big gears, which ensures rapid progression from low speeds to highway tempo. When braking, the XE shows again its good side stopping in less than 35 meters from 100 km/h.

Predominantly made of steel and only partly of aluminum, the C-Class manages to weight only 11 kg more than the 1.648 kg Jag. Which makes you wonder, why all the effort with the light metal body? Probably because the XE would tip the scales at similarly stout levels without it, just as the 1.788 kg Infiniti. 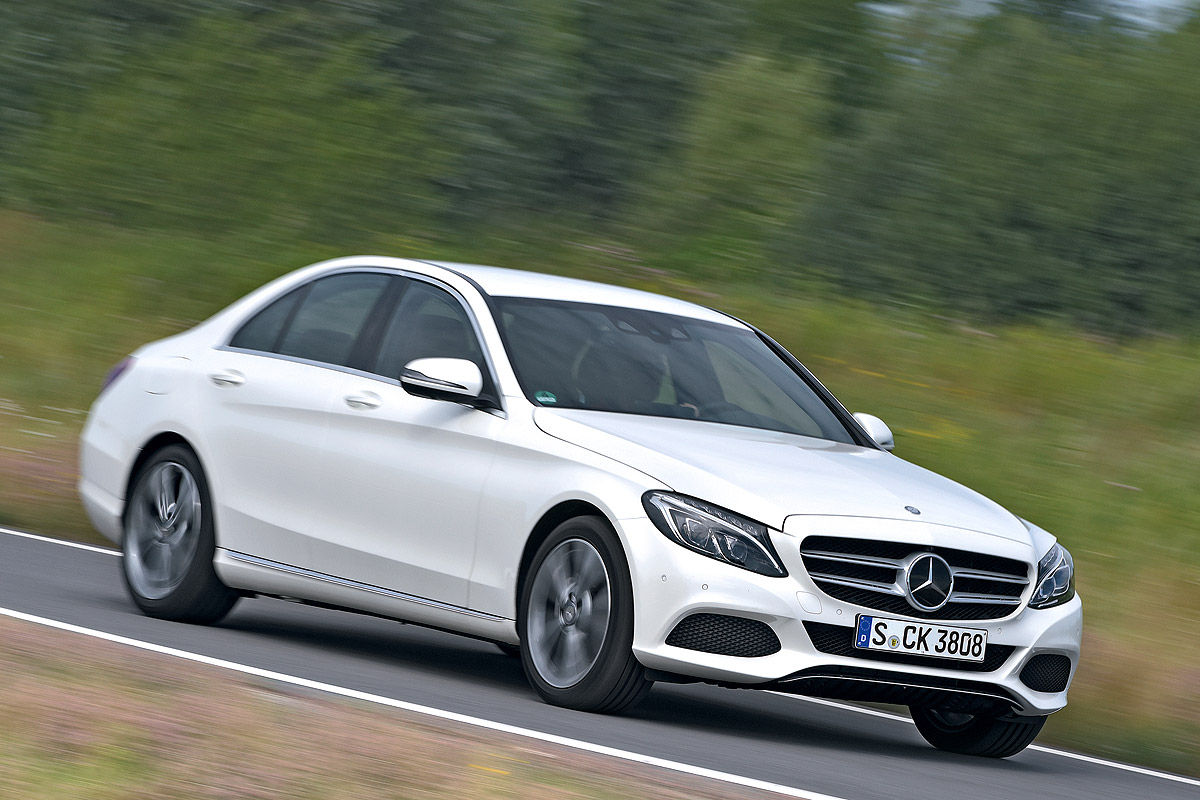 What about the engines and driving manners? The jaguar is clearly the more economical and faster car on the road, owing to the 10 HP advantage and low weight. With its direct, clean balanced steering the XE is slightly more rewarding in the handling department as well, again being the more agile sedan here. Does this mean the Brit crashes and burns in therms of comfort? On the contrary. Thanks to the suspension crafted to the high-standards of the F-Type sports car, manages to flow delicately above longer undulations, though not quite as effective as the air-suspended C-Class which easily holds its comfort crown in this company. 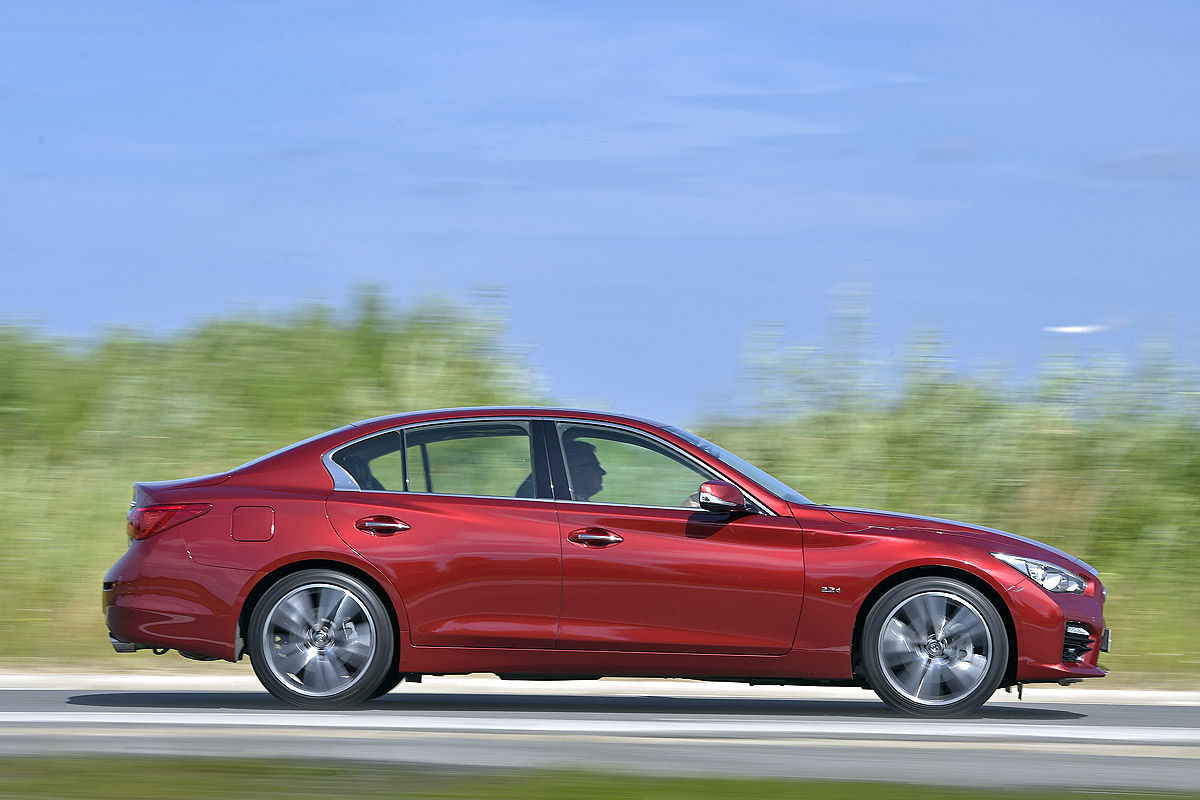 And the Infiniti? The Japanese four-door simply can not keep up with its rivals. Its vague, purely digital steering fights at every quick change of direction, the suspension seems to be made of pure wood, delivering a plethora of awkward bumps.

The Mercedes sits in a class of its own. No matter which mode it is operating in, the 1416 Euro Airmatic suspension always shines, especially with its gentle swing in Comfort mode, particularly suitable for cruising. And that’s not all. Sport effectively tightens the muscles of the chassis without compromising the comfort while the creamy, harmonious and balanced steering deserves all the praise. 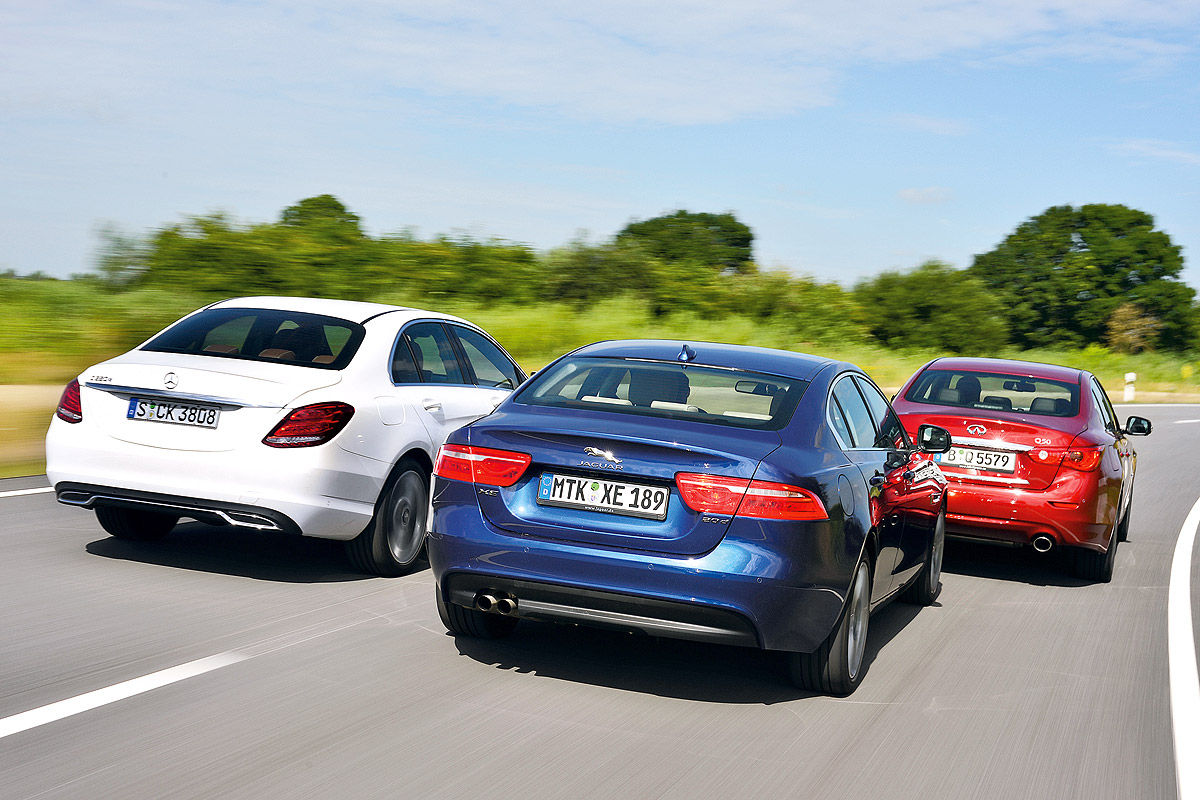 The C-Class simply feels as you would expect it to: calm and dignified with just the right dose of sportiness. The Benz is the family king as well, providing more space in the back than both the Infiniti and Jaguar. Despite its slightly superior agility, the XE should go back to the drawing board if it wants to beat the C-Class!