The Mercedes-Benz C-Class All-Terrain comes with all the benefits of a 40-millimeter higher ride than the standard C-Class Estate. It now goes as far as 1,494 millimeters from the ground. Having made its debut at the Munich Motor Show, it features the 4MATIC all-wheel drive and standard and two off-road driving modes. They are the Offroad and Offroad+. 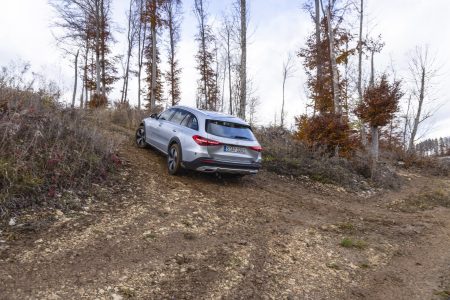 Two engine variants are available, a petrol and a diesel with 48-volt technology. Customers can order it at a starting price of 53,014.50 euros. It is the amount of money they have to pay if they want to take the gasoline-powered variant home. It is the C 200 4MATIC All-Terrain, with a 1.5-liter engine that delivers 204 horsepower and 300 Nm of torque. The boost effect comes with an extra 20 horsepower and 200 Nm for a limited period of time, straight from the second-generation starter-generator. This version is the fastest of the two Mercedes-Benz C-Class All-Terrain versions. It does the 0 to 100 km/h (62 mph) in 7.5 seconds.

Those who would rather have a diesel in their driveway can order the C 220 d 4MATIC All-Terrain. For this one, prices start at 55,394.50 euros. Customers receive the car with 200 horsepower and a peak torque of 440 Nm, plus the extra 20 horsepower and 200 Nm of torque from the 2.0-liter four-cylinder turbo-diesel engine.

Both engines transfer resources towards both axles via the 9G-Tronic automatic transmission and the 4MATIC all-wheel drive system.

Other figures of the Mercedes-Benz C-Class All-Terrain

The luggage compartment remains the same at 490 liters, or 1,510 liters when the backrest of the rear seats is folded down.