These are the more accessible potent versions of the premium German sedans, striving for a perfect mix of dynamics and comfort. The same people who brought you the BMW M235i xDrive/Audi S3 Sedan/Mercedes-Benz A 45 AMG 4MATIC test the other day are trying to find out which of these two premium sedans is the better choice, and we’re happy to report (was that a bit of a spoiler? We’ll see).

They both have three liter V6 engines and, very conveniently, they both develop the same power figure: a very symmetric 333 hp. The Mercedes-Benz C 400 4MATIC has the advantage when it comes to torques, gaining an extra 40 with its 480 Nm total, which might not prove to be as important as the fact that the maximum torque is available from as low as 1.600 rpm, as opposed to the Audi’s 2.900 rpm. 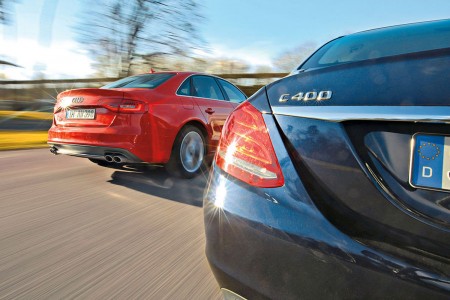 The C 400 4MATIC gets a lot of standard equipment and the test car had some very important optional ones, like the AIRMATIC air suspension system (1.416 euros) which, as the Germans put it, makes you feel like you’re in an S-Class. Add to this the very good soundproofing, and you get the kind of ride that puts babies to sleep.

The Audi has a more straight forward configuration and that makes itself felt instantly. Still, it’s by no means a rough ride and the Audi does get different gizmos that help improve comfort for those inside: the dynamic steering support (1.000 euros) lets the driver control the car with more ease and the sport differential (950 euros) allows for a more effective split of the engine power between the rear wheels. 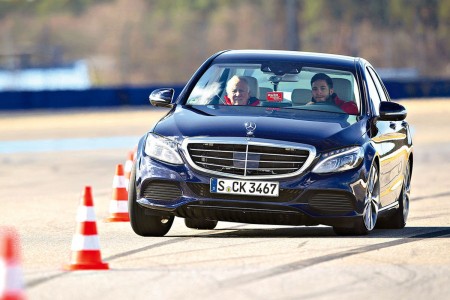 When it comes to the fun part, the C-Class delivers admirably for a car this comfortable, with a rather happy tail but not so that it becomes a problem. You do get the feeling rushing through corners isn’t exactly what it wants to do, but it’s willing to get through it without complaining. And this is where the extra torque comes in handy for the Mercedes-Benz, allowing it to navigate effortlessly around corners without shuffling through its gearbox.

Despite the less potent engine on the paper, the Audi S4 manages to feel snappier and more direct, a complain the Mercedes-Benz engines get pretty often – the real world feel doesn’t always match the technical specs. The 3.0 TFSI engine in the S4 uses a compressor for supercharging, as opposed to Mercedes-Benz’s turbocharger. This translates into a slight efficiency advantage for the C 400 4MATIC which sipped up 0.7 l/100 km less fuel than the S4, which is also 100 kg heavier. 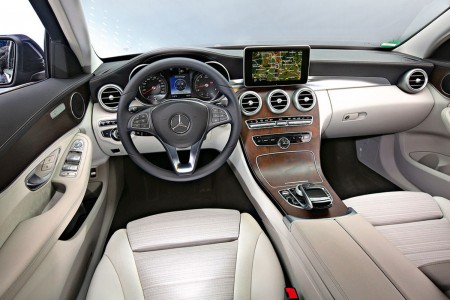 As design goes, this comparison is pretty unbalanced from the off: despite its facelift, the A4 can’t hide the fact it was born in 2007 and the interior features do nothing to help it. The C-Class is modern in both looks and equipment, with excellent connectivity and a long list of safety features.

The bottom line is that both these cars are excellent all-rounders who can only be topped in this respect by their station wagon versions – which also cost 1.500 extra, by the way. The Audi still offers a decent proposition, but it can’t really compete with the newer, sleeker Mercedes-Benz. As old as it is, though, it still gives it a good run for its money.