Mercedes-Benz tries to mimic the successful efficiency brilliance of the S 500 e with its little brother, the Mercedes-Benz C 350 e plug-in hybrid. Can the eco C-Class really offer a compelling mix of power and fuel efficiency? FIRST IN-DEPTH REVIEW.

In theory, you can go wrong with an eco C-Class. Pure electric cars aside, plug-in hybrids are the most economical and tax-efficient vehicles on the market. As long as you can overlook the rather steep price difference compared to their regular siblings.

The electric motor sits between the main unit and the transmission and can be clutched in and out. Performance is also brisk, at 250 km/h (155mph) top speed and a 0-62mph time of 5.9 seconds. C 350 e is as fast as all but the most extreme C-Classes, the Mercedes-AMG 43 and 63. All the above-mentioned resources are managed via a revised 7G-TRONIC PLUS seven-speed automatic transmission which sends all the power to the rear axle. 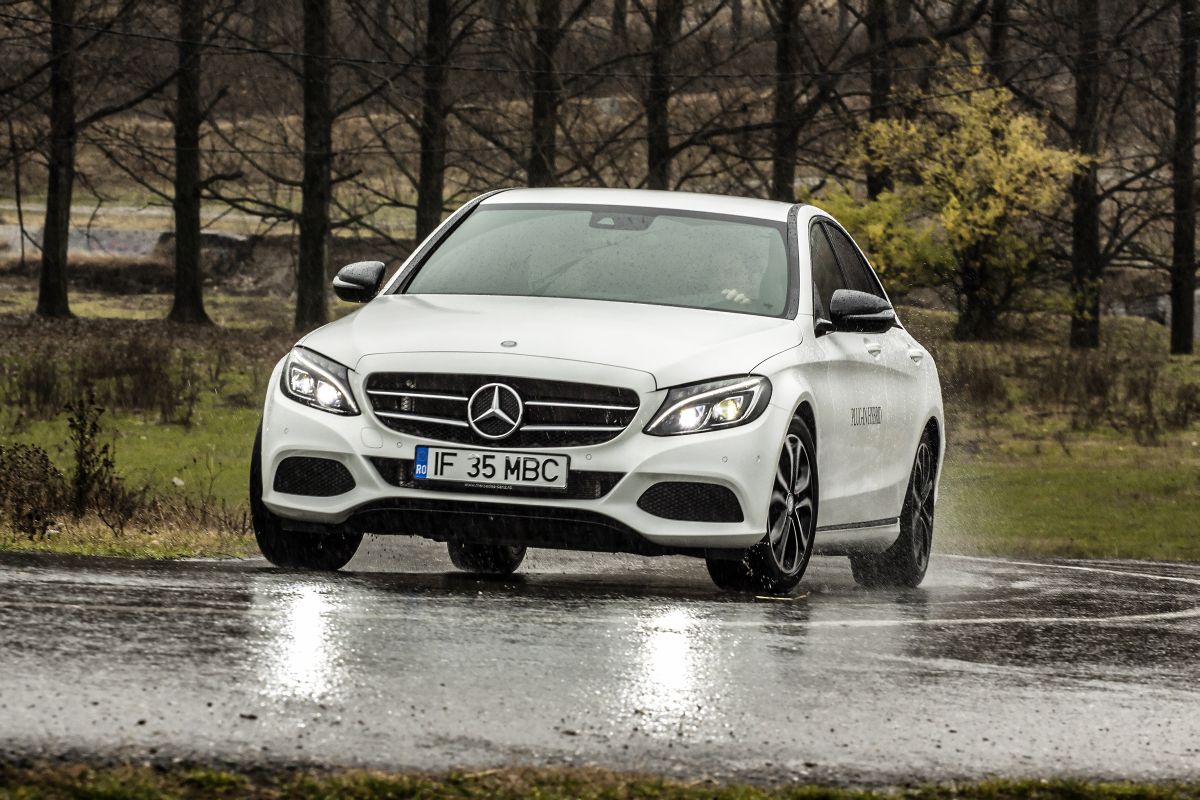 The official fuel consumption values promise a very low 2.1 l /100 km average. Of course, measured according to the NEDC cycle, which tends to favor hybrid models (the measurements are done with the battery fully loaded), none of these values can be actually achieved in real life, where the hybrid is clearly more efficient in the urban environment, but not particularly so on the highway. But more on that subject later, in our real-world test. The real trump card is the CO2 emissions rating of only 48g/km (little up on the 44g/km BMW advertises for its 330e). 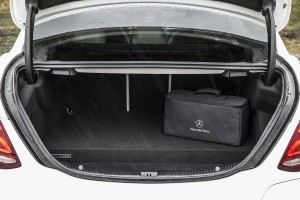 The water-cooled 6.2 kWh Li-ion battery is manufactured by Magna and sits under the trunk for better weight distribution. The downside is the sedan now offers 335 liters of cargo space as opposed to 480 liters in standard guise. The floor itself gains a fairly chunky step, too, in the process, making it more difficult to load heavier items into the cargo area. The rear seat also doesn’t fold at all, so longer items are also prohibited. The charging socket is integrated into the rear bumper, hiding from plain sight under a small flap carved on the right side corner. From a normal 230V outlet, the car is ready to go and fully charged in 3 hours (or only 2 hours from a special wall-box). Stored in an elegant black bag (but without any special space reserved for it in the trunk) is the standard charging socket (type E/F, Mode 2) for normal outlets only – a separate 3-PIN charger for high-output industrial sockets costs 505 euro, while a wall-box dedicated cable (Type 2, Mode 3) is offered for 285 euro (Germany). 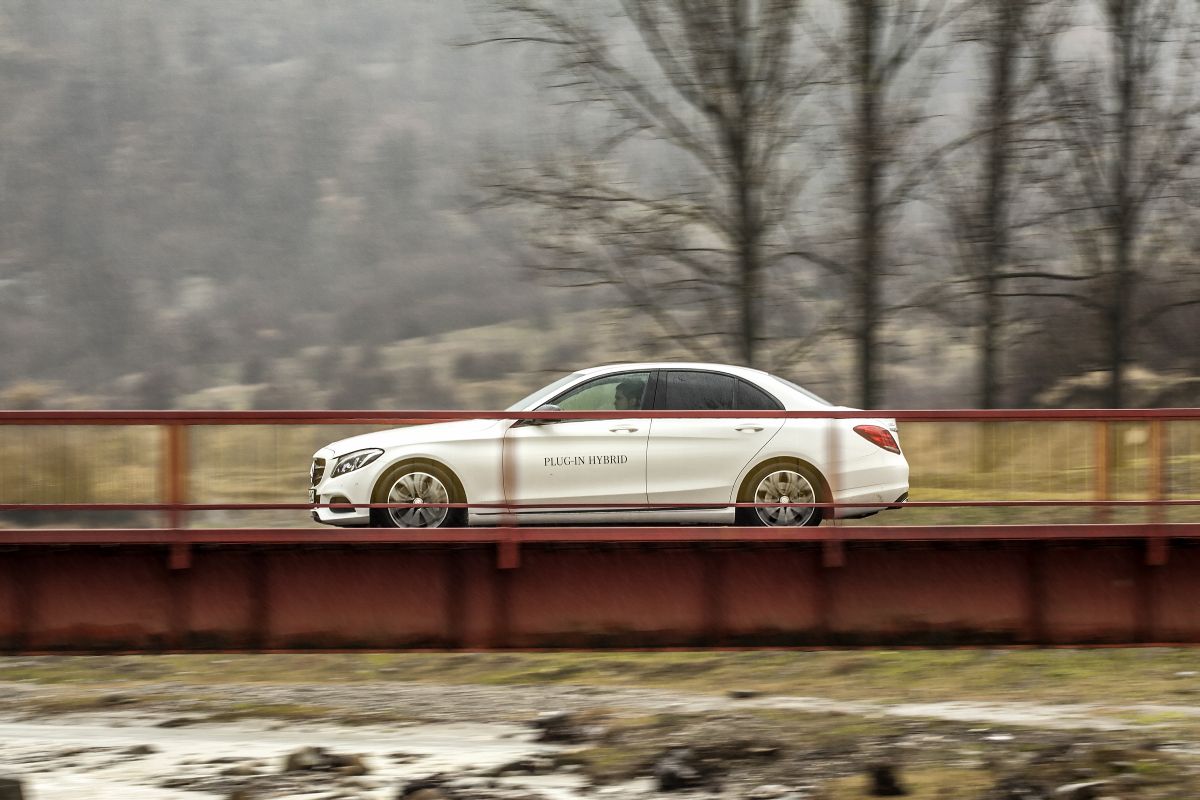 Mercedes offers several driving modes for the hybrid system – E-Mode, E-Save, Charge and Hybrid. The modes can be selected via a small switch placed near the COMAND dial. The default is Hybrid, automatically selected right from the outset. Petrol and electric motors work together and brake energy recuperation is used to score maximum economy. On rising road sections the electric engine will give the petrol engine an extra oomph, while on descending slopes, the C 350 e recovers braking energy and puts the transmission in sailing mode, for extra efficiency. 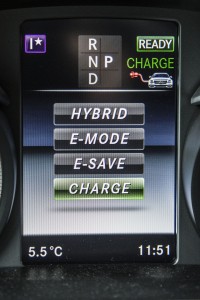 In E-mode, the C 350 e relies on pure electricity. The electric motor and batteries deliver a 31 km (19.2-mile) range at speeds up to 140 km/h (80 mph), on battery power alone. E-save mode saves the energy in the battery for later in the journey, preserving the current after a long highway drive, before entering a metropolitan crowded area, for example. If the navigation route is set, the charge/discharge battery process is better managed for optimal energy usage.

There is also a Charge mode. In this setting the petrol engine drives the car and recharges the battery simultaneously – the electrical engine does not work. If you forget to charge the car overnight, the Charge mode is certainly useful. In less than 30 minutes the battery is fully charged – if you stay parked with the petrol engine on. In traffic, the charging time is longer. However, the use of the heat engine as a generator and on the other hand, the combined power of the heat engine-electrical engine system is not at your service any more.

Ok, enough with the talk about the technical secrets. Let’s see how the new C 350 e drives. Helped by the instant torque of its electric engine the Mercedes sprints forward with quite some vigor. In pure electric mode, the electric motor pushes its big torque into the system at very low revs (ideal for use in the city) with the charge only tailing off a bit at higher speeds. Along the test itinerary roads of Bucharest, the real electrical autonomy varied between 20 and 24 km in late autumn to light winter weather conditions: 5-7 degrees Celsius. The heavier the traffic is and the more the driver has to brake, the bigger the energy saving is and the higher the autonomy – the opposite of a petrol engined limo which would see its consumption rocket. 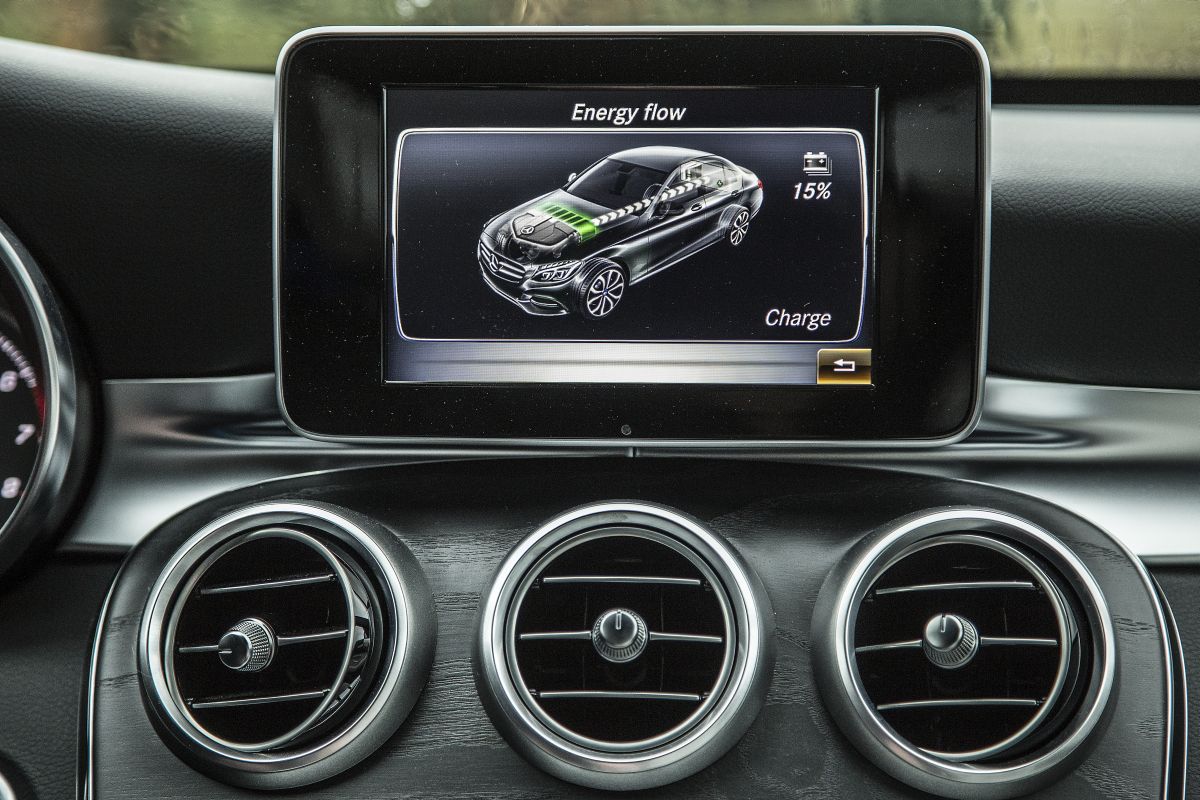 The rest of the time, the hybrid system does a good job of cutting in the engine smoothly when it’s needed. Interestingly, the C 350 e rolls as much as possible without prompting the combustion engine to life. For this, the driver must not go over the aforementioned predefined pressure point on the throttle – in other words, the petrol engine does not start unless the throttle is heavily pressed on. And, quite practical, the moment the turbo engine starts is clearly defined, as the throttle encounters a pretty higher resistance. Another pleasant surprise is the reaction in the brake pedal. For most of the Plug-In hybrids or electrical models, there is a back stroke in the brake pedal when recovering the energy. It’s not the case in the C 350 e, as the linearity in braking is transcendent. 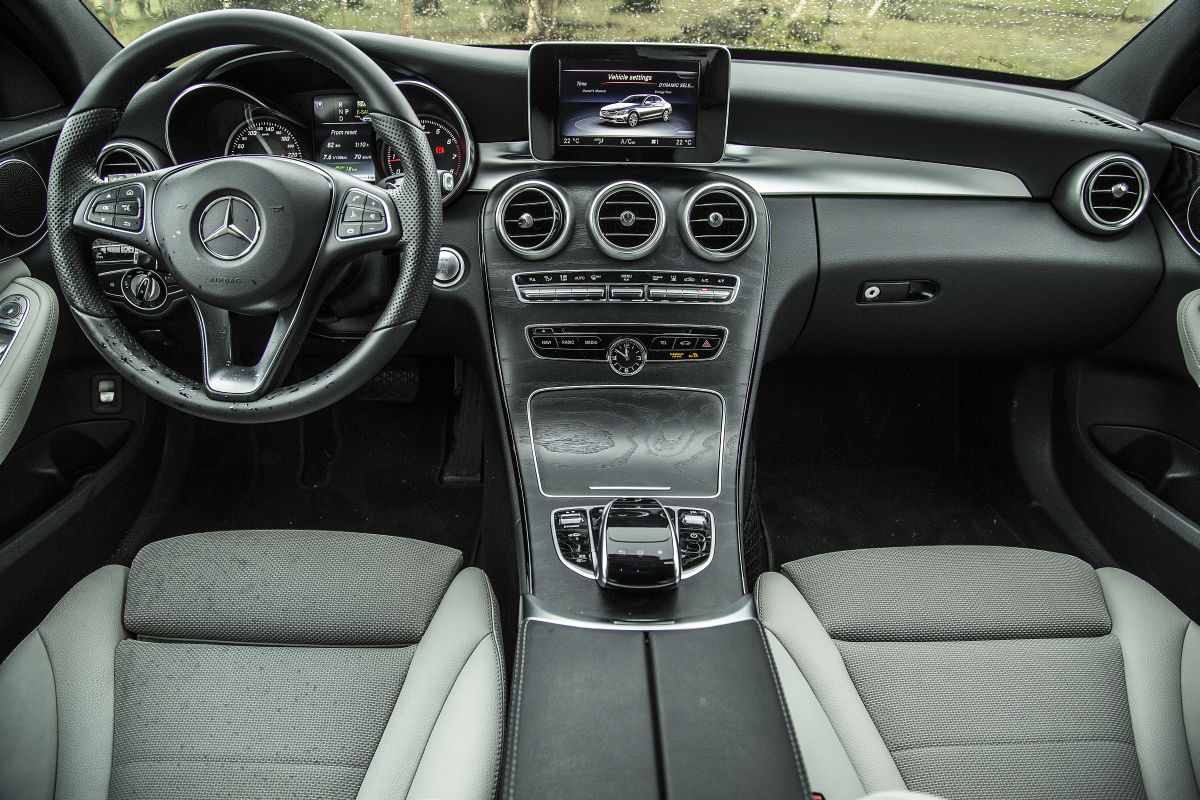 Airmatic air-suspension is standard, in order to cope with the demands of the extra 200 kg that the entire system adds to the kerbweight. It also offer a small but useful temporary increase in ride height – ideal for rough patches of road or high bumps. The ride is also good, actually slightly better than the standard C-Class’. The extra weight in the tail makes the car bob over regular bumps, while changes of direction are not as brisk as in a diesel or petrol C-Class. Mercedes’ Dynamic Select system, fitted as standard, alters the car’s character (including steering weight, suspension firmness and throttle response) and comes in Eco, Comfort, Individual, Sport and Sport+ flavors. Since the stiff suspension setting on Sport and Sport+ can be a tad unsettling around town, for daily use we recommend the more relaxed Comfort mode. 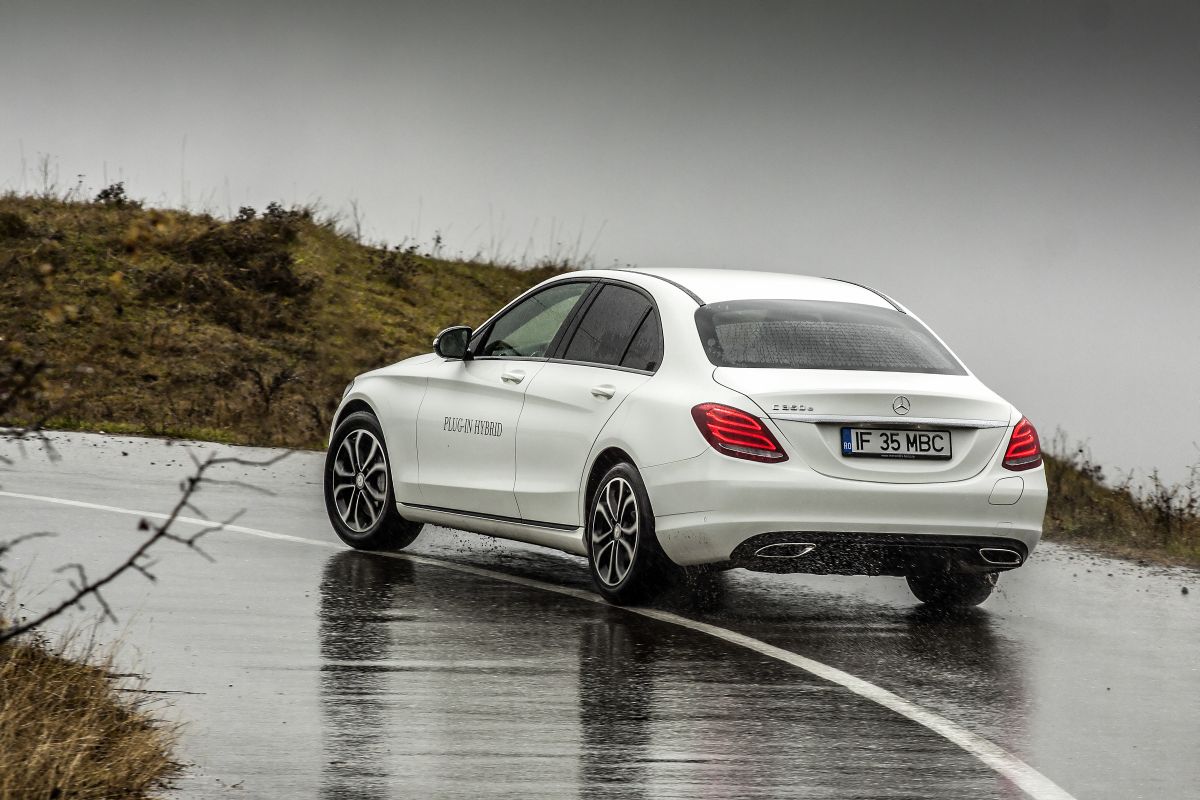 And then there’s real-world economy. Mercedes promises 31 km of pure electric drive. On our 19 km city run, covered exclusively in E-Mode and with a full battery (98%), we managed to end our tour with a 5 km remaining range – all driven on electric-energy alone, of course (average speed 20 km/h, energy level available 22%). We repeated the test on the same 19 km route, this time in Hybrid mode, and the result was actually good for a 279 HP limo: with the battery almost repleted (29%), the mixed consumption clocked in at 7,0 l/100 km with a 19 km/h average speed and 15% battery juice left. 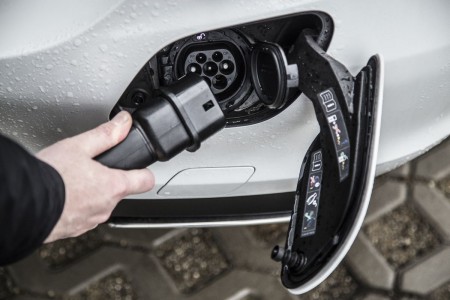 Outside the city, we recorded an average of 5,5 l/100 km, starting the run with the battery half empty (47% energy level) and an electric range estimated at 7 km. Our test was completed relying exclusively on the Hybrid mode on a 75 km route comprising of national express roads and small towns – at an average speed of 64 km/h. An important detail: the petrol engine remained silent for 28 km.

In the end, just as advertised, the C 350 e proved very effective as a zero emissions cruiser around town, for routes shorter than 25-31 km. If you leave home with a fully charged battery on a 20-30 km run, Plug-In Hybrids are the future, surpassing not only their regular counterparts but even the efficient diesels. Unfortunately, technology does come at a price. The cheapest C 350 e will cost you 51,051 euro (Germany) and that is before you start toying with the options list. Meanwhile, a classic petrol-only C 300 will save you 7,259 euro. It is powered by the same turbo L4 engine, albeit in a higher state of tune, at 245 HP. True, the AIRMATIC air-suspension (1,416 euro) reduces the financial burden on the plug-in hybrid. Early adopters always pay more. 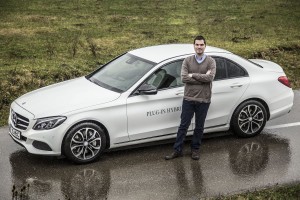 With its new C 350 e Mercedes finally has a genuine eco alternative on its hand. What impresses is the dual-personality approach. The greenest C-Class blends the tangible electric range for every day zero-emission commuting with the dynamic prowess only a luxury cruiser in the deepest sense of the term can offer. Only the hefty price premium compared to a conventionally powered C 300 remains discomforting.