Biberach, Germany. A tiny town with little over 30,000 residents. But little do they know that not for from their homes, yards of adventure lie. Right there, there is the Mercedes-Benz Driving Events off-road track. A track where Bridgestone takes us on an adventure. Game over, the adventure for grown ups starts now.

Taxi drivers and transportation companies have no clue on how to get there. They’d rather pick you up from a hotel near by or they ask for a map with the location of the circuit. But how would a map of the circuit itself look like? Well, a few narrow paths through the woods, that wouldn’t even dare to set foot, afraid not to get stuck in the mud, a coupe of water holes and bumps.  Not big bumps. Gigantic ones. 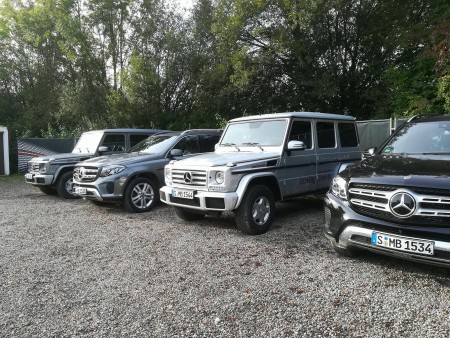 Early morning, right outside a hangar, on the gravel still damp, the cars are lined up like soldiers. Peaceful and shinning bright, as if they have just come out the assembly line. Two GLS models, a GLE and so many G-s. Many 350d-s and 500-s, the latter with the V8 beast still hibernating under the hood. It is pointed out to us that they are shod with all-season Bridgestone tires. It’s all so clear now, I think out loud. The track can’t possibly be that difficult. You can’t go that far with street rubber. We get on-board the cars and in a convoy formation, we follow the „footsteps” of the black „pace car”, a G500. I disengage the Parktronic that „screams” irritatingly, in panic, whenever I get too close to the bushes on the side of the path made by wheels. It’s not like I have a choice. 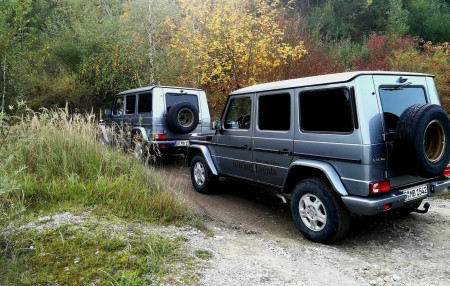 We stop and get off the cars. The instructors want to see our flabbbergasted faces when, up on bumps, the boxy beast is suspended with one wheel up in the year. This is it, it’s over, we must call up a crane to pick the car up. Everybody starts flashing their cameras, but they don’t even get the sharf right and the G changes its position. Rear and central differentials locked, M1 on and here it goes. The wagon with a 205-milimeter ground clearance glides like a boat sailing on waves. We are sent back into the cars and I come to think that my GLE, a family car after all, will be left out on this drill. But the radio glued to the windshield calls out: “Next car!” My GLE is the “next car”, so here I go. Through the open window on the left, the instructor checks my settings. M1 and I drive on. I softly press the accelerator and my 3-pointed starred „boat” leans and lists and lurches on the bumps. I feel the diffs operating undereneath me and I am terribly sorry when the drill is over. I start all over again, this time with a GLS and then with the invincible G. Everything runs smoothly, everything seems so simple. The instructor confirms that the Bridgestone Dueler A/T 001 and Dueler H/P Sport that the cars are shod with feature the exact pressure used for the road. It really seems unbelievable.

Next, the convoy is led to a small, yet steep hill. In the passenger’s seat, it feels complicated and risky, I grab the handle in the dashboard and hold on well. I get the feeling that I could tear the grass outside my window with one hand if I put the window down. „Keep your windows up”, we are told. „If you roll over, it’s not like you can put the car back on its wheels by pushing the ground with your arm!” „Roll over?” Has anybody just said „roll over”?

But behind the steering wheel, things turn simple and, once you feel you are too close to rolling over, you just steer away from the hill and the well trained giant with Bridgestone tires regains perfect ballance. And we do this again and again, until it feels completely unnatural to drive on a perfectly plain surface. 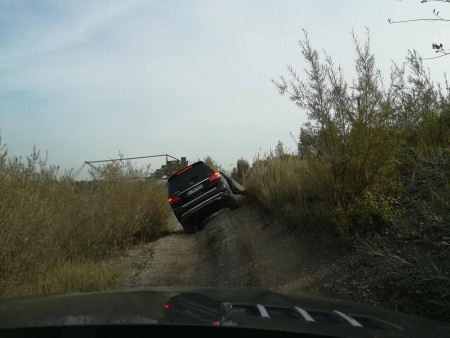 The wade follows. “If you except to see the images displayed by those spectacular catalogue photos, with cars splashing water all around, you will be disappointed”, the instructors warn us, explaining: “You will splash only if you go fast. But if you go fast, the engine will suck water instead of air and nobody wants to get their feet wet, right?” They say it so naturally as they have been there before a gazillion of times. Oh, where are my rubber boots when I need them? Just in case… With a wade depth of 60 centimeters, we cross the water and the cars look as if they were amphibians.

The first part of the drill ends here and the second one follows after the lunch break. We leave the family cars at home. Only the G-s go to “war”. We actually look as if we were a military convoy. The wagons built in Graz march to their next mission. Once again, we lock the rear and the central diffs, the LEDs confirming the command light up in the center console. I am one of the lucky few who got their hands on a V8-powered G500, with the engine pulling more than 2.5 tons of car with quite a personality. With the diffs locked, I get the feeling I am pulling the weight myself. I can’t help but wonder whether the stars of Hollywood who got their G-wagons with the red leather interior have any idea about what they cars are capable of doing? How about the Pope who, back in 2008, was driven around in a popemobile based on a G500? He could have driven it up and down the Vatican stairs again and again just for fun! 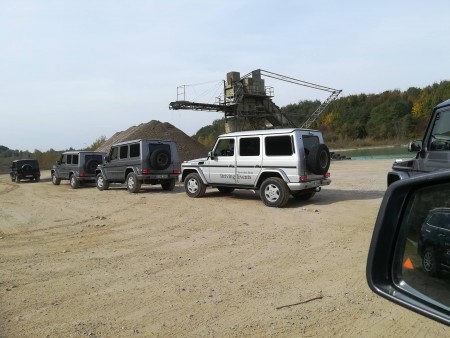 I press the accelerator and hear the 4.0-liter V8 roar. The dashboard shows a fuel consumption of 30 l/100 km. There’s no way I going to spare it when I climb up the rise from which the sky is the only thing that I see in front of my eyes, as if the bonnet could only get stuck up in the clouds. On the descent, I deactivate the diffs and slide down, just guessing the road ahead. I suddenly get the image of another lake in front, for the trainees to check the abilities they achieved on the first drill. “You don’t need the brake”, the instructor tells and he’s as calm as a cucumber, holding the radio in front of his mouth, even though he is right next to me. The Hill Descent Control does all the job, I just hold the steering wheel. Will the car stop in the lake full of mud? Once the descent is over, I instinctively press the accelerator, just to make sure I won’t get stuck in there. That simple it was! 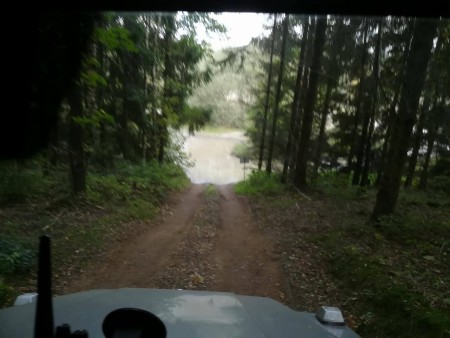 The steep climb comes next. The route that I passed so many times during our drills, just guessing that you can only go up there by foot or by horse. By horse it was indeed. 422 horsepower actually, with 610 Newton meters on my disposal, all aligned through mud and water, with the Bridgestone tires glued to the ground all this time. Not all at once though, but at least three. Or two, making a huge difference between grip and glide. As unrealistic as it may sound, you only believe it when you watch it from outside. Behind the steering wheel, you may feel that your instincts are playing tricks on you. Out here in the woods, going up and down steep inclines, the 7G-Tronic automatic transmission might as well be a 2G-Tronic. You don’t really need more than that. 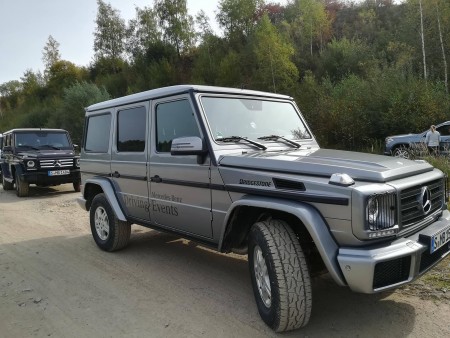 The training set up by Mercedes-Benz Driving Events and Bridgestone turned us – as the instructors liked to flatter us – experts in off-road driving. All participants took home certificates of survival. I mean… participation.