19 million people have clicked the all-mighty Like button on the Mercedes-Benz official Facebook page. That is like the entire population of a mid-size European country or better said, Norway, Denmark and Sweden all three put together.

To celebrate the new amazing milestone of 19 million fans on Facebook, Mercedes-Benz has asked German-born artist Markus Haub to give them a helping hand. So the very talented hands of the former car designer made a 3-piece painting on canvas displaying the Shooting Brake. 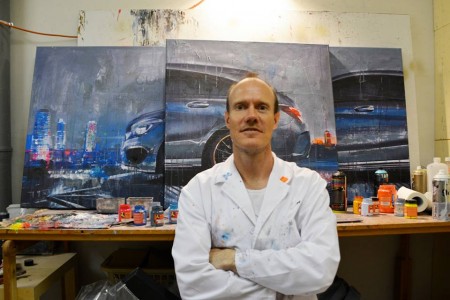 Markus Haub is a man who knows his way around cars. He had worked as a designer for Volkswagen in Sitges, not far from Barcelona, Spain. And later on, around the year 2000, he moved to the Barcelona city center to work for Renault’s design studio. He has not left Gaudi’s city ever since.

His technique combines photography, digital and manual painting. “It always starts with a photo”, Haub says. After digital rendering, adding effects, cutting off shadows and intensifying colors, the picture will soon be finished on canvas. “It is a game of creation and destruction and creation again”, tells the artist. 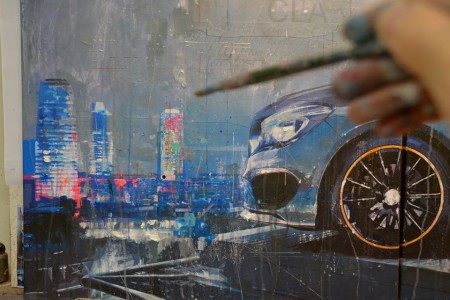 The German grand brand is the best liked Facebook car page. The Bavarian rival BMW comes second with almost 18 800 000 fans. The Italians in Ferrari have just surpassed the 16 million milestone.

These would be the best liked auto brands* on Facebook.