Mercedes-Benz takes the partnership with China’s number one search engine, Baidu, to a whole different level. From now on, the Mercedes-Benz cars that will be sold in China will include software users to easily access content from their smartphones such as music, internet services or various data referring to their itinerary.

Daimler and the Chinese tech giant Baidu announced their partnership on the eve of the consumers’ eletronics show CES in Shanghai.

The Chinese company and the German grand brand are targeting to offer the Chinese Mercedes-Benz customers more individual services for their connected vehicles, all adapted to the specifics of the Chinese market. First step of the new stage of their collaboration, Mercedes-Benz is planning on integrating Baidu’s CarLife system into their cars. CarLife is an infotainment system for smartphones, developed by Baidu, specifically for the Chinese market. Once the smartphone is synchronized with the vehicle, the data is easily transferred wia wireless or USB connection on to the car’s dashboard, while the functions would be wholly controlled by the smartphone.

Apart from their connection plans with Baidu, Daimler announced that the company is on to explore wireless recharging of mobile phones in cars, as well as the recharging of the electric cars with no cable involved. The new technologies will be developed together with Qualcomm. The chipmaker is already a partner of the Formula 1 team Mercedes AMG Petronas. 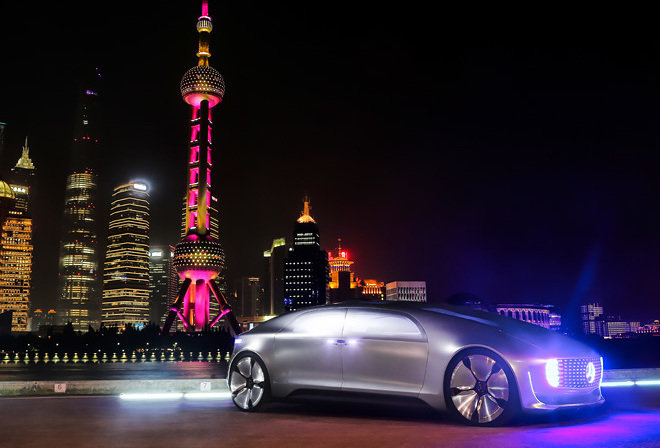 Mercedes-Benz did not go all the way to China only to secure the partnership with Baidu, but also to brag about their latest masterpiece. The Mercedes-Benz F015 Luxury in Motion research vehicle is one of the highlights in the Germans’ stand at the CES in Shanghai. Mercedes wants to show the Chinese that their autonomous UFO-like vehicle would make wonders in the congested traffic of the cities packed with locals and tourists. The occupants can do just about anything, with no need to watch the road, nor the cruising direction, so they can make optimum use of the journey time. Something that the Chinese market can be magnetized by is the continuous flow of information between the F015, the passengers and the outside world.