Mercedes-Benz Actros with Highway Pilot – First time on the highway

The Mercedes-Benz Actros truck has run a historical journey. The Actros has just become the world’s first series-production autonomous truck to ride on the freeway. It was driven along the Autobahn 8, between Denkendorf and Stuttgart.

The Mercedes-Benz Actros equipped with the intelligent Highway Pilot system has just hit the road. The people in Mercedes are proud to be part of a historical world premiere: 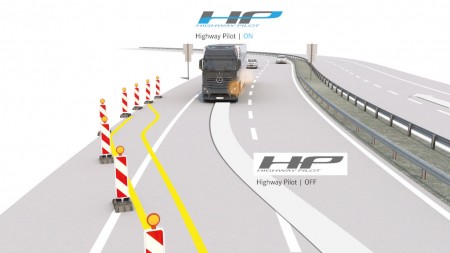 “Today’s premiere is a further important step towards the market maturity of autonomously driving trucks – and towards the safe, sustainable road freight transport of the future. During the world premiere of our Freightliner Inspiration truck in the USA in May, we announced that the Highway Pilot would soon also be tested on German roads – and just five months later we have achieved this interim goal. ” says Daimler Executive Board member Dr. Wolfgant Bernhard.

The version of the Highway Pilot installed in the Actros allows semi-autonomous driving, giving the truck the possibility to steer by itself. Still the driver can take full control of it anytime. The Highway Pilot is pretty much what the autopilot is in the aviation.

The semi-autonomous system comprises of a front-mounted radar and a stereo camera, as well as assistance systems such as Adaptive Cruise Control +. 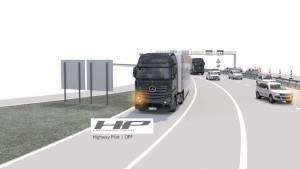 The Highway Pilot is also capable of reacting to unforeseen circumstances. In case the weather or the road markings deteriorate, the system requires the driver to take over the steering. In case the driver fails to react to the audible and visual signals of the Highway Pilot, the truck is automatically brought to a safe stop.

Autonomous driving has considerable advantages, especially in the road freight transport sector. Most importantly, it improves safety: the Highway Pilot system never suffers fatigue, nor becomes distracted. A study run by Daimler Trucks has shown that the driver’s fatigue decreases by 25 percent, if he is relieved of monotonous tasks like lane-keeping.

Ten months later, in May 2015, the Freightliner Inspiration Truck also ticked its world premiere. In Nevada, USA, the concept vehicle received the world’s first road approval for an autonomous truck.

And now, as nobody believes it before they see it, there it is. Watch for yourself!