Elvis Presley kept a car for eight years. It’s a record period for the King of Rock’n’Roll, who used to gift the automobiles to friends and relatives after weeks of use. The car was a Mercedes-Benz 600 that has now entered an auction.

It is a miracle that this limousine stayed in Elvis Presley garage for so many years. He used to present them as gifts to those around him just weeks after purchase for no reason. The Mercedes-Benz 600 is one of the 200 cars that made his list.

The 600 underwent several restorations, but it still bears traces of wear. The current owner refused to fix them. They are part of the car’s personality. Despite the traces that time shaped on its body, the over 50-year old automobile looks spectacular. Painted in silver, it comes with a black leather upholstery and automatic two-zone air conditioning. 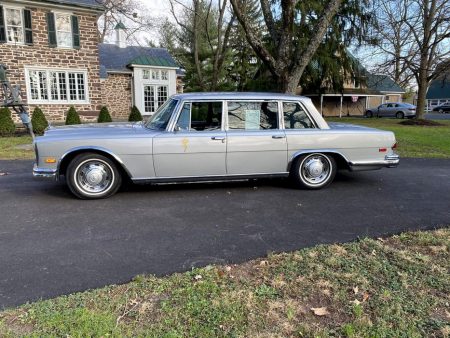 There is a 6.3-liter V8 engine operating under the hood, in cooperation with a 4-speed automatic transmission. The odometer reads 96,560 kilometers.

Elvis specifically requested the TCB monogram on the front doors. The letters refer to the name of his comeback band, Taking Care of Business.

Three shot glasses, one of which the current owner found in the trunk, and a refrigerating compartment, as well as a series of photos in which Elvis shows up with the car, are included in the price.

The story of the car is somewhat strange. Elvis got the car from Mercedes-Benz of Hollywood in California. The Mercedes was delivered to the King on the 15th of December 1970. He took it home to Memphis, Tennessee. He subsequently ordered a somewhat similar car in Memphis and took that one to California. 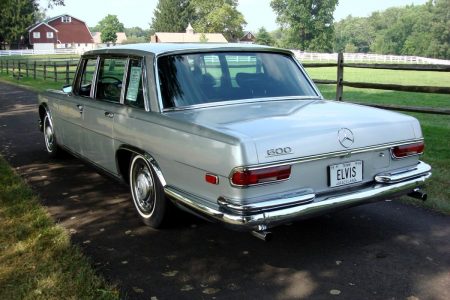 The latter sold in 2010 for $107,400 at a Bonhams auction. The first of the two, that Elvis eventually gave to his friend Jimmy Velvet, is the one auctioned by Bring A Trailer. The price has reached $218,000 four days before closing.