Mercedes-Benz 300 SLR “722” pays tribute to Sir Stirling Moss at Goodwood. The former legendary driver passed away in April 2020 at the age of 90.

In his honor, Mercedes-Benz Classic will therefore present the original car that won the Mille Miglia back in 1955. Onboard this car, Stirling Moss and Denis Jenkinson set an unbreakable record. They covered the route from Brescia to Rome and back in 10 hours, 7 minutes and 48 seconds. They then had an average speed of 157.65 km/h.

An engine with eight cylinders and a 3.0-liter displacement, developing 310 horsepower, sets the car in motion. The power unit makes it hit a top speed of over 300 km/h.

The organizers are planning to display the iconic Mercedes-Benz 300 SLR at the Goodwood Festival of Speed from 8 to 11 July. The original sports car will also be on display at the Goodwood Revival from 17 to 19 September and will also cover some laps there.

A Mercedes-Benz W 196 R with exposed wheels, that enthusiasts know as the “Blue Wonder” will keep the Mille Miglia winner company. It is the car that Juan Manuel Fangio won the Formula One World Championship titles in 1954 and 1955. In 1995, in a similar racing car, Stirling Moss was a runner-up in 1955. 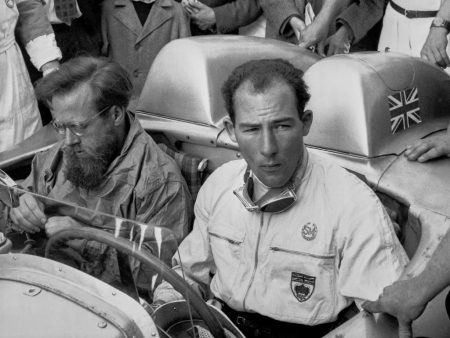 His career finished with an accident on 30th of April 1962, at the 100 Miles of Goodwood, while he was driving a Lotus. Moss sustained severe head injuries. He recovered, but his abilities were never the same after the crash. The incident forced him to retire at the age of 32.