Mercedes-Benz 300 Sc Coupe – the car of the elites

It was called “the car of the elites”. And it seems it had every right to be so. In October 1951, one month before series production of the Mercedes-Benz 300 began, another top model, the 300 S, was presented at the Paris Motor Show. The international press was speechless. The regal and traditional design did not surrender to the aerodynamic trends of those times.

Four years later, a revised version of the 300 S was displayed at the Frankfurt International Motor Show. The newly revised model was internally called the 300 Sc and it was the car of the future half a century ago. It featured a single-joint cross shaft axle with a low pivot and the carburetion was replaced by direct fuel injection, which was still a novelty after its launch in the 300 SL one year before. The engine output went up to 175 HP from the previous 155 delivered by the 300 S. A chrome badge –Einspritzmotor (injection engine), engraved on the rear bumper, proudly proclaimed the advanced technology of the new automobile. 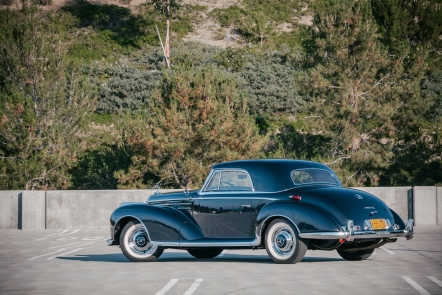 And now, if the elites of the collectors want to feel every bit royal, they can have it. It’s theirs for… well, the price is only offered upon request. Before requesting it, you must know that the 300 Sc has venit “wing” windows and larger indicators on the front and at the rear. Two horizontal chrome moldings placed along the sides of the hood, as well as chrome wheel arch trim were distinctive features of the model. 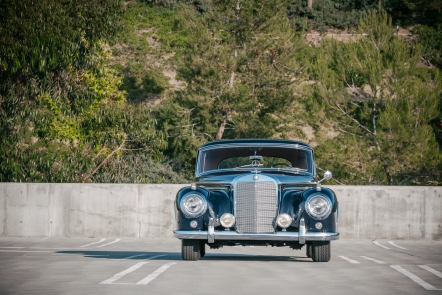 Only 200 of these were built: 98 coupes, 53 Roadster versions and 49 Cabriolets. The exclusivity of the model was also mirrored by its price back then 36,400 Deutschmarks (DM), a full 7,500 DM more than its contemporary stablemate, the 300 SL “Gullwing” Coupé.

Built as a display vehicle for the New York Auto Show, the automobile that is for sale rolled out the gates of the plant on March 16, 1956. It came with an automatic antenna, a windshield washing system, a hat box and shoe box in left spare tire well (so useful back then!), 1 kilogram of Nitro paint (beware of the scratches!)

The Mercedes-Benz 300 Sc Coupe first came in a Light Blue Metallic paintwork with Red leather interior. After a complete restoration eight years ago, it is now presented in dark blue exterior and natural leather interior. The selling advertisement states that it spent part of its long life in the garage of a Mercedes-Benz Californian collector and 6 more years in the Classic Center’s care.