Elena Luchian, March 13, 2021
2.56K 0
Home Motosport F1 Mercedes-AMG W12 – The secrets of the modified floor everyone is talking about

Mercedes-AMG Petronas Motorsport revealed this season’s car a week before the testing in Bahrein. They showed the W12 in all its glory. Almost all of it. Even though the Technical Director spoke of the floor, they kept it covered. Now it is finally out.

The car on show back at the factory, on the day of the official launch, did not feature all the details that engineers had been working on over the winter. It was a move to prevent their competitors getting a god look before the new season, Technical Director James Allison admitted back then. “The floor is such an important aerodynamic component . Small geometrical changes bring large reductions in performance. Once the rules had been established, our task was to figure out how to recover the losses brought by the changes.”, he explained.

“If you’re looking to slow a car down, which is effectively what the regulation changes were intended to do, modifying the floor is by far the easiest and cheapest way of achieving your objective. Down there, there’s a bunch of aerodynamic details that we are not quite ready to release to the world”, James Allison added.

Ready or not, the reigning champions had to reveal their secrets in Bahrein during pre-season testing. As expected, the Mercedes-AMG W12 floor was quite intriguing. In order to slow the car down, the engineers designed an underfloor that would induce vortices at the outer edges with a series of ripples. It would therefore also limit the reduction in downforce, in compliance with the 2021 regulations.

What are the changes to the floor of the Mercedes-AMG W12?

According to James Allison, the Mercedes-AMG designers had to get back the performance the car lost due to regulation changes. The key modifications on the floor are 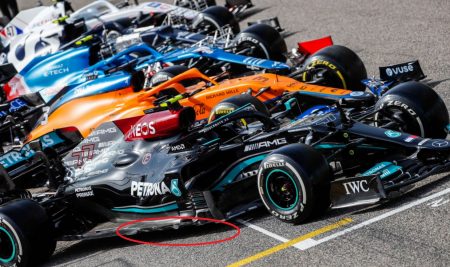 Mercedes-AMG W12 is having a hard time in Bahrein

The Mercedes-AMG W12 had quite a hard time in Bahrein. Valtteri Botttas had to settle for one installation lap in the Mercedes-AMG W12 before having to return to the garage. The team accused a gearbox issue and put the screens in front of the garage to be able to work.

During Day 2 of testing, World Champion Lewis Hamilton did a childish mistake and ended up spinning on the gravel.

Team Principal did not keep back his disappointment. “”On the first race weekend on qualifying we’ll only know once the flag drops, bulls*** stops”, Toto Wolff said.

Posted by Mercedes-AMG Petronas Formula One Team on Friday, 12 March 2021