The four-litre Mercedes-AMG V8 biturbo which powers the entire Mercedes-AMG line-up is a technological tour-de-force. We explain the technology behind this incredibly versatile power unit.

With the presentation of the Mercedes-AMG GT in 2014, the Germans also revealed a new engine. The 4.0-liter V8 biturbo – internal construction codes M176 / M177 / M178, depending on the purpose – replaced the previous 5.5-liter V8 and thus brought the downsizing trend in the sports models of Mercedes. Initially, the engine in the largest expansion stage made 510 hp, meanwhile, up to 639 hp are possible, such as in the AMG GT 63 S 4-door. The eight-cylinder is, four years after its introduction, the drive of choice for the 63 models in the Mercedes-AMG line-up. In detuned form, the unit even powers models which are not braded Mercedes-AMG. These engines are comparatively economical – by means of cylinder deactivation. 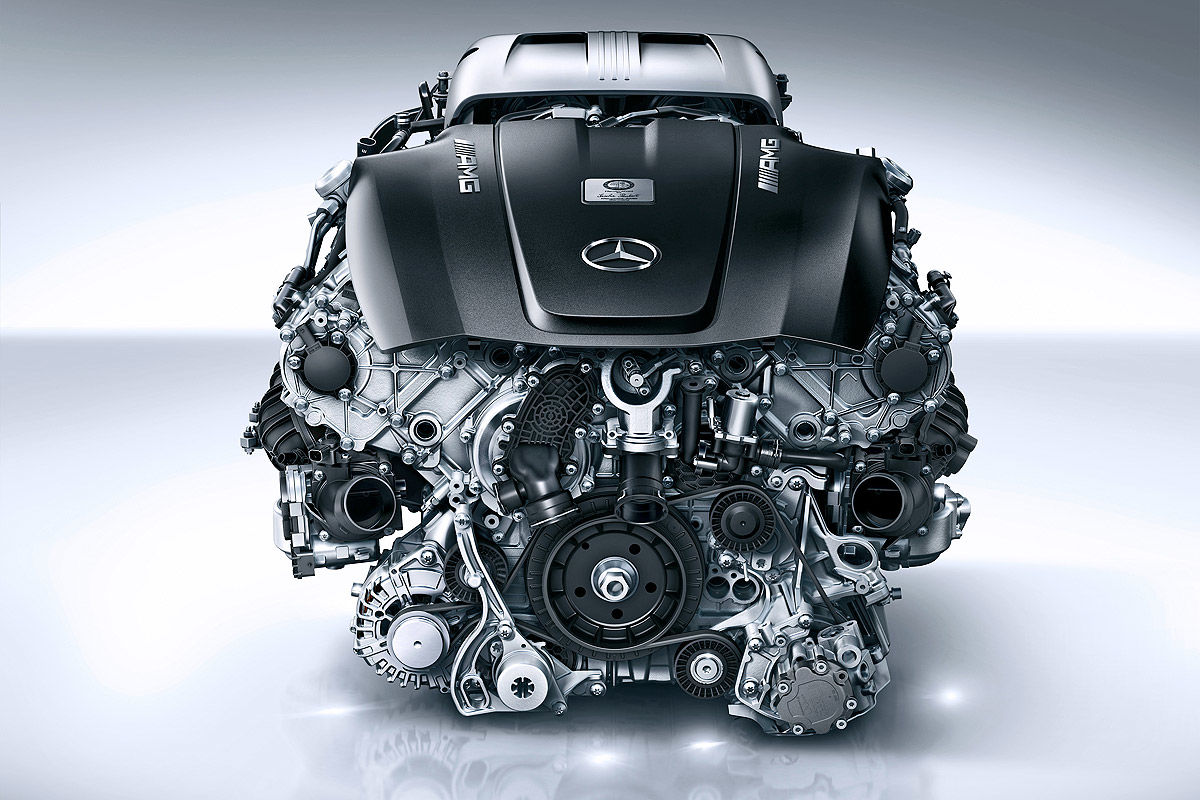 The V8 is technically very closely related to the four-cylinder engines of the M133 series (since 2013 in the A45). Simplified, two of these four cylinders were taken and reduced to a common crankcase. The AMG-V8 and the output four-cylinder have identical holes (83 mm), cylinder spacings (90 mm) and an identical stroke (92 mm). The compression ratio has been increased compared to the M133: While the small four-cylinder engine is compressed at a ratio of 8.6: 1, the V8 biturbo operates at a ratio of 10.5: 1. Mercedes uses in the AMG eight-cylinder aluminum forged pistons. Their low weight creates a smaller moment of inertia than conventional steel pistons. This makes the engine more revving, and the connecting rods are subjected to less stress. 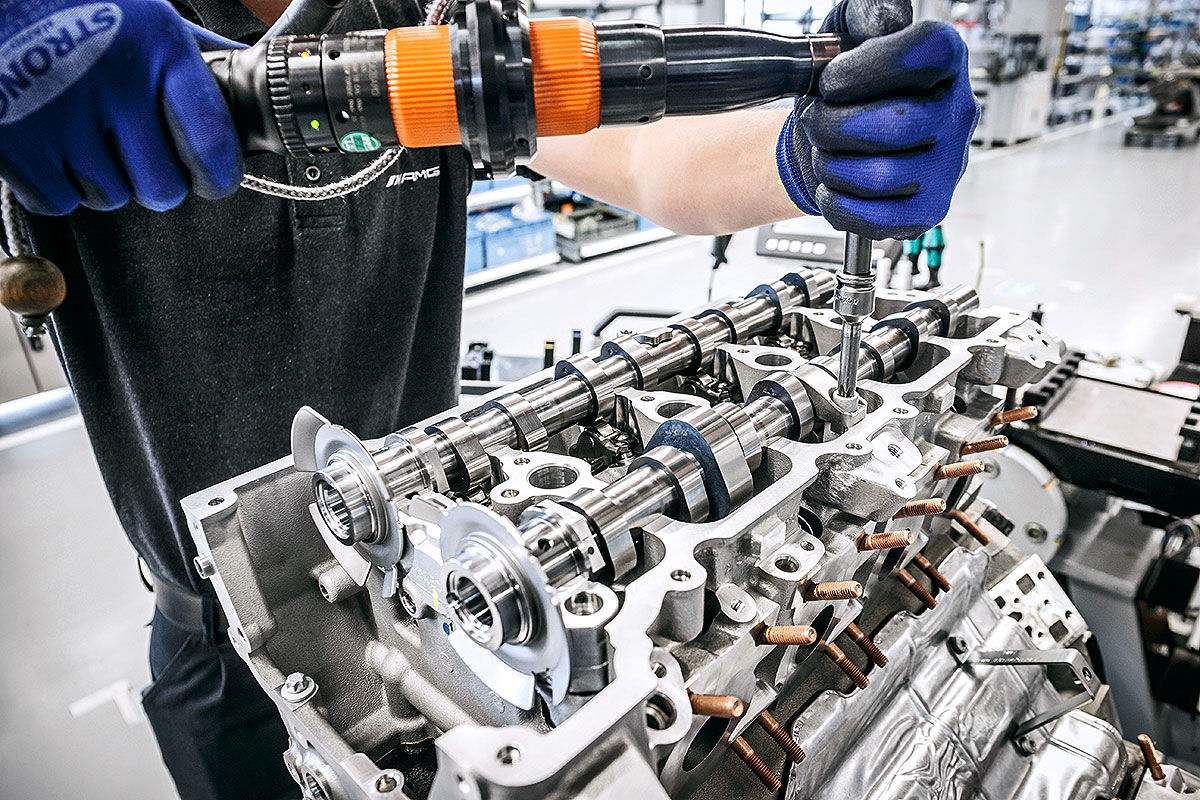 To reduce the friction between the pistons and cylinder liners, Mercedes uses the Nanoslide technology: the cylinder walls are coated with a very thin layer (0.10 to 0.15 mm) of iron and carbon. Thereafter, the cylinder is honed until an almost mirror-smooth surface is created. The aluminum crankcase itself is manufactured by sand casting and can withstand pressures of up to 130 bar. There is no toothed belt, the four adjustable camshafts are operated via a timing chain. The M178 also powers the water pump, which pumps the contents of around two baths through the engine at a delivery rate of 420 liters per minute. 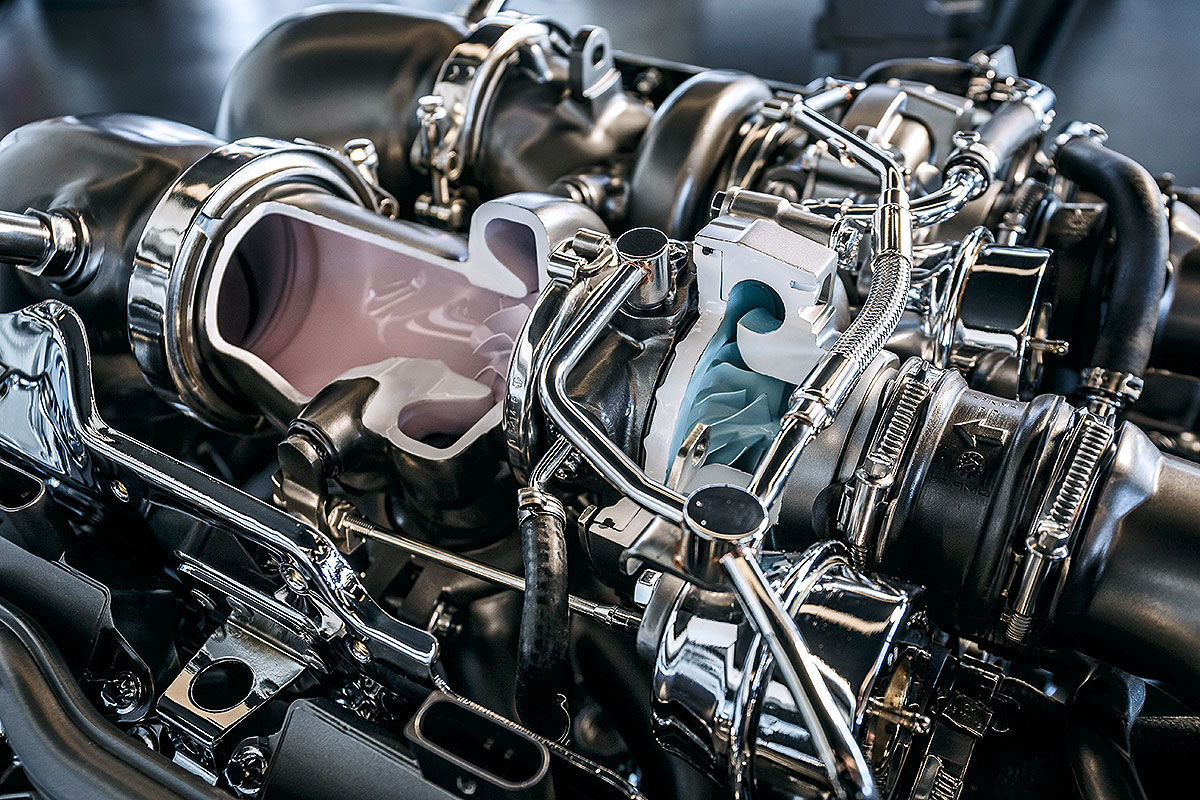 The engine is charged via two turbochargers. Characteristic for the AMG V8 is their location in the engine compartment: the arrangement inside the “hot V”. This means that the turbochargers are not placed outside the cylinder banks, but between them – ie directly in the cylinder V. It is the first engine from Mercedes with this arrangement. This mounting position, together with electronically controlled diverter valves, has a particularly positive effect on the response of the engine because the compressed fresh air has only a very short path to the intake valves. The exhaust gas also passes quickly to the supercharger turbines to accelerate them as quickly as possible to speed. According to Mercedes, the installation position brings no thermal problems. Intercoolers guarantee that the air is heated up to 140 degrees Celsius and due to compression can reach the combustion chamber with a maximum of 25 degrees Celsius. 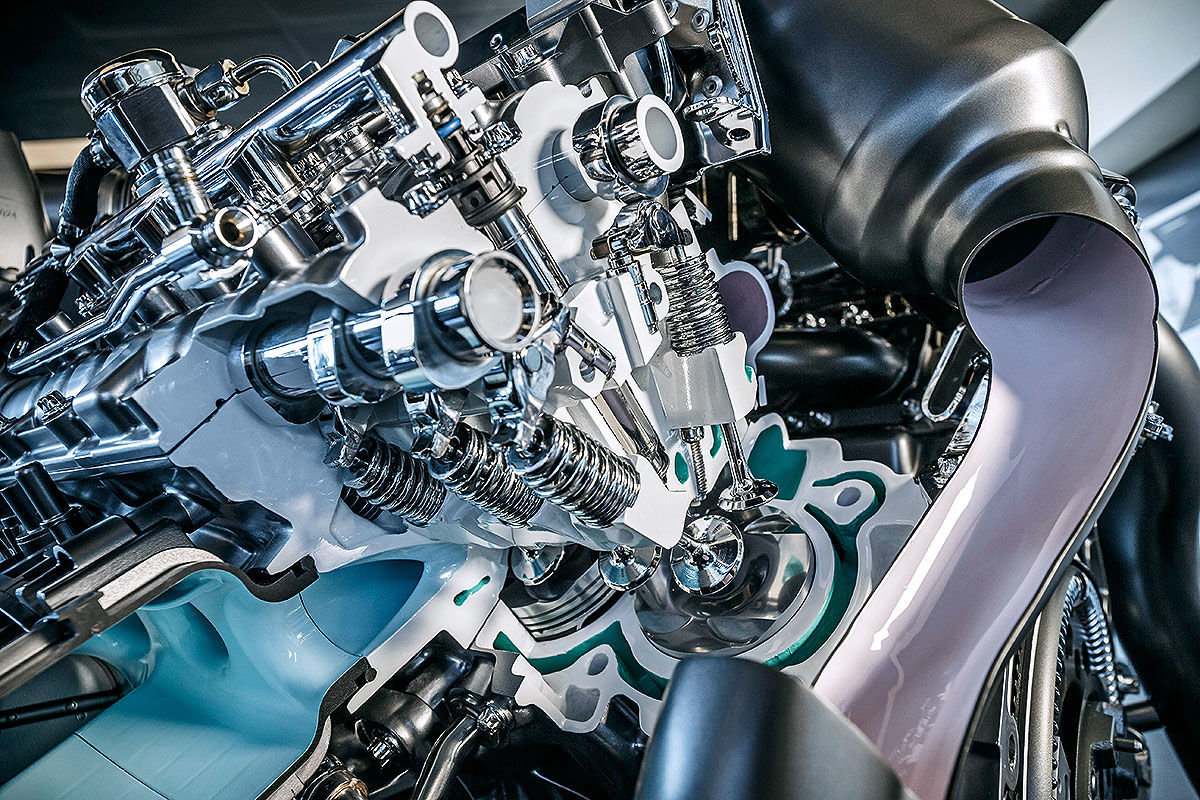 To ensure lubrication of the engine even in fast bends, a dry sump lubrication is used for engines with the construction code M178. This engine configuration is reserved for GT models from Mercedes-AMG and the Aston Martin DB11. Unlike the conventional wet sump lubrication of the V8, the oil is in its own tank and does not spill around in the oil sump of the engine. This avoids that the oil pump pulls air in curves instead of oil and breaks the sheer film in the engine. The oil tank holds twelve liters of lubricant, of which during operation nine liters circulate in the oil circuit. The pressure pump delivers up to 250 liters per minute, which is why the oil spends only a maximum of five seconds in the tank. Then, the oil is sucked out of the crank chambers again. Due to the omission of the deep oil sump, the engine shrinks in height. Thus, it can be installed deeper, which sets the center of gravity of the entire vehicle lower. 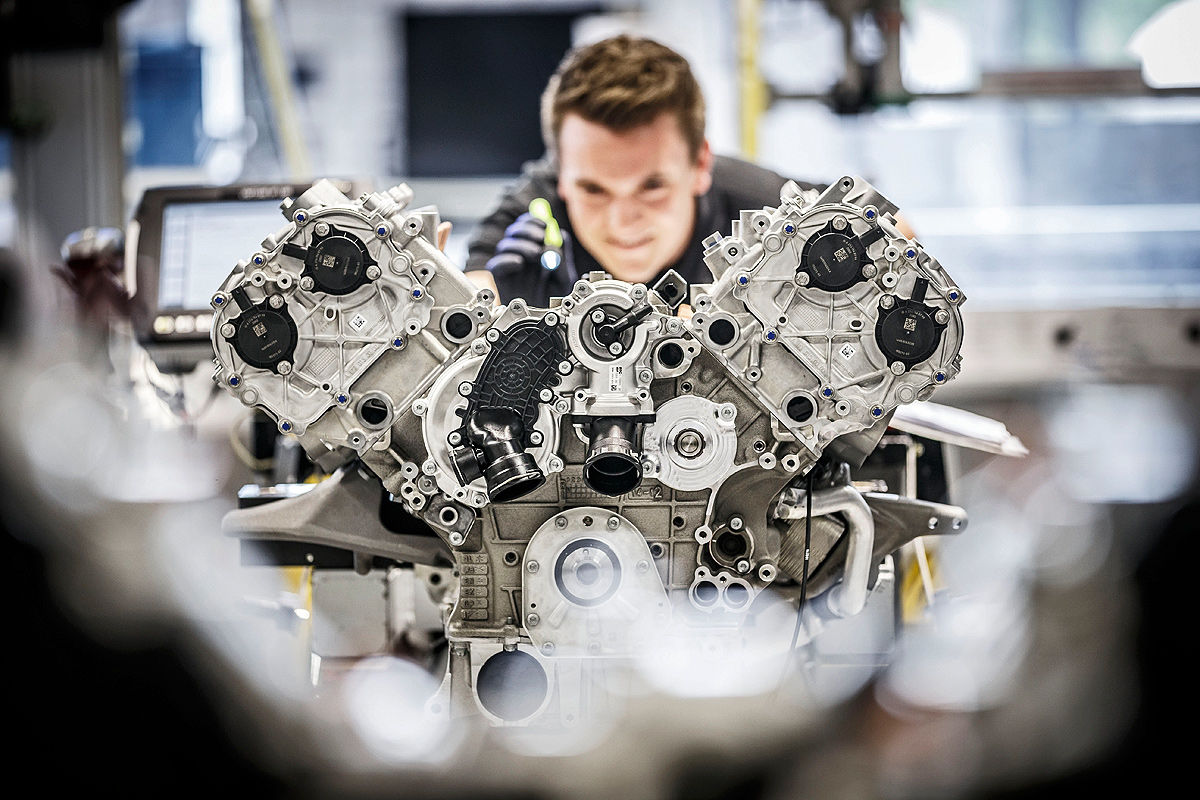 Models that use the engine and power levels

Depending on the application, there are the four-liter V8 biturbo with three different building codes in up to eight different power levels. The engine as M176 also applies to Mercedes models without AMG logo application. Here the power varies between 422 and 469 hp. As M177 the AMG V8 has a power range of 476 hp to 639 hp. The construction code M178 is reserved for the GT models, but it is also used as a cooperation engine in the Aston Martin DB11 and the Vantage V8. The range of outputs extends between 476 and 585 hp. 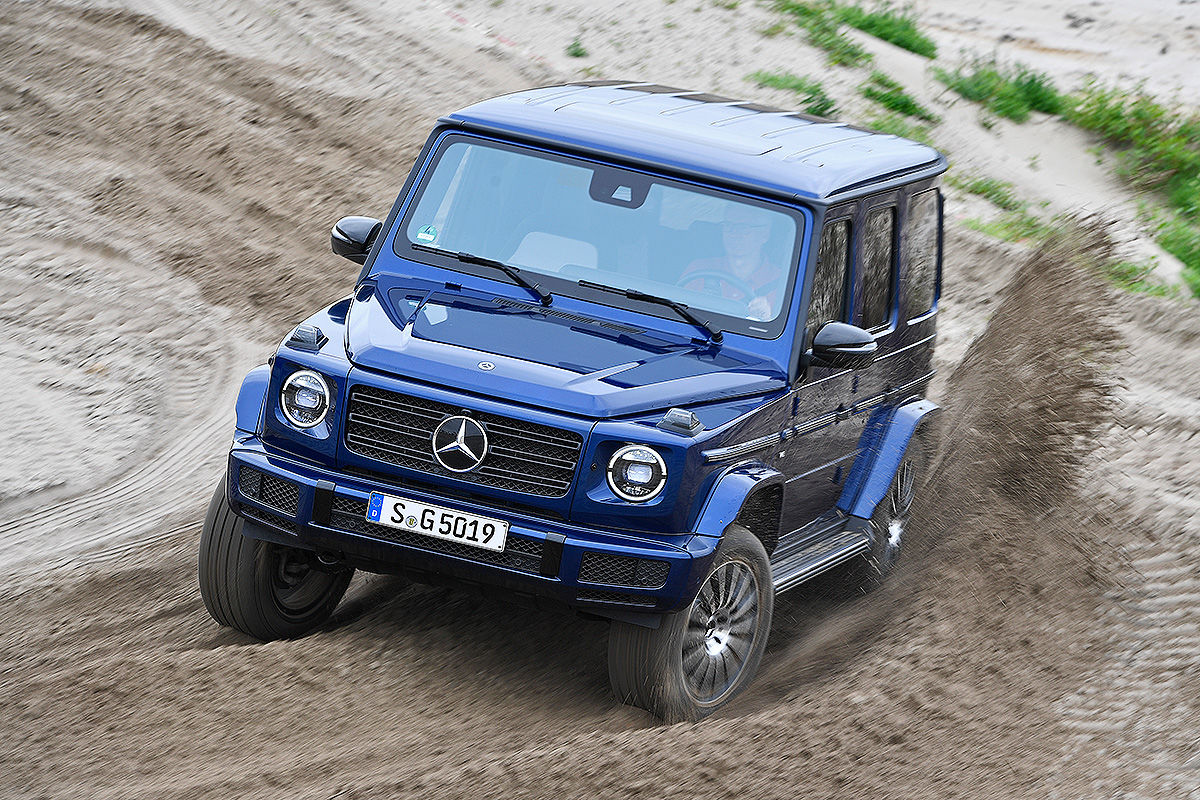 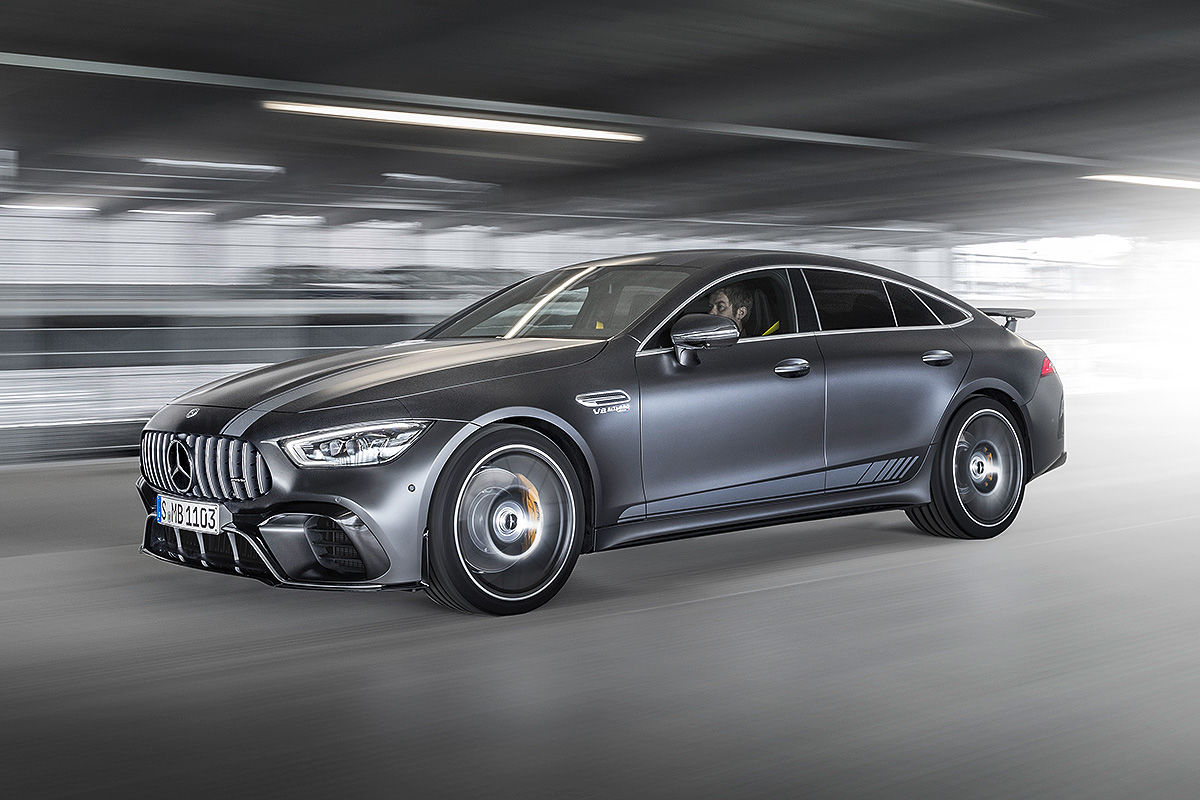